Wine & Cheese for the Guys

Breakfast this morning was a coffee and a couple of pieces of toast – we thought it was likely that we would have lots of visitors because it’s Father’s Day weekend and the weather is just about perfect.  Maybe we’d even have hordes of guests!  We had the tower open and the museum & gift shop open when a family of three arrived around 9:30 but then nothing until early afternoon when seven guys arrived.

These guys have been taking an annual trip together and this was their 31st year which we thought was an impressive testimony to their friendships.  They moved the picnic table to a shaded spot by the tower and setup a spread of expensive imported cheeses and wine, joking with Patty that they would never have imagined their trips would have evolved from cheap beer and pizza to their current menu over the years.

While they enjoyed themselves, another group arrived consisting of a dad and his two daughters (the mom was on

their sailboat with their dog).  After their tour and the guys separately taking tours in two groups, Patty walked down the hill with the family and happened to mention that that fog horn is now activated by VHF radio.  Shortly afterwards, when we’re pretty sure they had reached their boat, the foghorn mysteriously started sounding.   Hmmm….  It was a crystal clear day.  Maybe they thought it needed testing?  Actually, Patty ran into the guys later and they really got a kick out of hearing it too.

When Patty was down in the cove with the family, she saw three boats moored in the cove so we anticipated another group coming up but we didn’t see anyone else until much later.  While Patty was taking care of our visitors, I worked on fashioning a new handle for the gas grill – the original was only attached on one side and a part was missing.  Luckily I found just the right nuts and bolts to make a Plan B style replacement and we now have a new and functional handle.

chili (yup, we still had some in the freezer), tomatoes, onions, jalapenos, and cheese over totopos.  Both of us just grabbed snacks for lunch and never sat down for a meal so we ended up eating dinner pretty early when we both were hungry.

After dinner, we had two guys come up for a visit to the lighthouse and museum.  We stood with them chatting on the catwalk for quite a while and found out that one of them attended a writer’s program at Warren Wilson college just outside of Asheville.  It’s funny that Warren Wilson is such a small school yet this was the second person we’ve met with a connection to it.  They also told us that we had only two moorings in the cove plus the Coast Guard mooring.  They’re the second ones to tell us that in the past couple of days – we should have six plus the CG one?  They also said another sailboat came in with plans to spend the night but left when they couldn’t find a mooring.

the water and a light chop, it was hard to distinguish between our smaller sized mooring buoys and lobster buoys.  We think we counted the two in use (both bigger sized ball shaped buoys), the Coast Guard buoy (big and partially painted orange), and two smaller ones.  Our lobster keeper is tied to one of the smaller ones which makes it hard if not impossible to tie to depending on how he attached it.  We don’t want people to feel like they’re being turned away for lack of space so we’ll have to follow-up with our peeps on the mainland next week to see what we can do.

Favorite Moment(s) – Finding a pile of washed up bottles by the Donkey Engine House.  Obviously someone had hiked down to Cobblestone beach and done a cleanup.  Thank you, whoever you are! 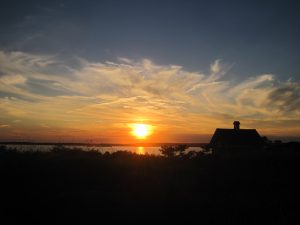