Another Wednesday is here and it’s our day off-island. We did the regular

Wednesday routine with a scheduled 7am rendezvous with the Wednesday Warriors and Ethan at the cove. We got down to the beach a few minutes early to check the patches on Hinckley’s leaks with optimism that they are working. It was chilly and the side with the leak felt a little soft but it might just be the temperature – we’ll check again in a couple of days. There’s no doubt that, at a minimum, it’s better than before. With a few minutes before Ethan’s arrival, we sat on some rocks and enjoyed our thermos of coffee.

When Ethan and then Wednesday Warriors arrived, we did the normal dinghy shuffle and were off to Popham, arriving there by 7:30 or a little after. We stopped at Cyndy’s to drop off our water jugs – this week we put a little bleach in each, filled them with water, and left them in the sun to think about themselves until we were headed back to Seguin in the afternoon. By 10:30ish, we were done with our chores (laundry, grocery shopping, hardware store, seafood store, gas for the truck, and natural food store).

During the past week, one of our visitors told us the USS Zumwalt was docked at the Bath Iron Works. The Zumalt is a new ship built at BIW and just recently (we think) completed sea trials and was delivered to the US Navy. It’s has an odd appearance, similar in a way to the stealth bombers. All flat surfaces and shallow angles. It also has a weird looking hull that appears to be wider towards the water line and then narrows as it rises above the water. Anyway, the visitor told us it was visible from the US-1 bridge over the Kennebec River so we parked at the

visitor center and walked up the bridge (because we don’t get enough hills on the island…HA!) where we had an unobstructed view of the Zumwalt and what appears to be another ship of the same design that is partially built. It was really cool to see, and growing up near the Newport News Shipyard, I was surprised how close we were and how clear a view we had from the bridge. Definitely an odd looking ship though. We’re hoping we’ll see it sail past Seguin while we’re here.

We headed to J.R. Maxwells, a downtown restaurant, for lunch and on our walk over, we passed a car with a “Dales Pale Ale” sticker on it. It’s brewed by Oskar Blues in Brevard, North Carolina – our hometown! Lunch was ok and, of course, we hit Dot’s for ice cream afterwards which is our weekly treat. Earlier in the morning, we met a couple from Florida that were at the laundromat on a shore day from a cruise tour of New England they were taking from Providence to Portland with a stop in Bath. They were admiring the sticker on our camper where we fill in each state we’ve visited and struck up a conversation which led to Patty telling them what we were doing in Maine. Later, walking down Front St. in Bath, we ran into them again and they told us they had bought a picture of Seguin and were telling everyone they met to visit the island. They were sad not have enough time to visit, but were hoping to see us from their ship.

We stopped at Cyndy’s on our way to Popham and gave our water jugs a good rinsing and then filled with fresh water. They looked pristine and new – no floaties to be found. We met Ethan back at Popham around 2:30 and were joined by a woman named Lindsay who works for Maine Inland Fisheries. She is working on a study of Sand Piper birds and wanted to scout Seguin for a location to place a radio tower for tracking banded birds. If we understood correctly, this species migrates from the arctic to South America with very few stops. The birds can fly 5-8 days without stopping for food or water, and fly at altitudes of up to 10,000 feet. She’s in the third year of a three-year study and from the experience of the past two years, she felt Seguin had the perfect location for tracking the birds.

We talked with Lindsay on the way over to Seguin and then Patty rowed ashore first with Lindsay so she could get started scouting along the North Trail while we completed the shuffle. As they reached shore (it was high tide with no beach), Cyndy’s daughter Carney

was switching places with Patty when a wave caught the dinghy and Patty’s foot started going under the boat. There was nothing she could do but go down….she looked at Carney and said “I’m going!” and into the water she went. She said it was a little chilly but no damage done so she headed up the hill with Lindsay to get her pointed in the right direction. Meanwhile, I finished getting our stuff ashore with Carney’s help and then just hung out until Lindsay came back. Rick and Julie were also still up the hill working ‘til the last possible minute to get as much done as they could. And the Wednesday Warriors did get a lot done – the gift shop screen door is ready to hang, they scraped paint on the front porch and picnic table, and cleared an area where the blacksmith shop was at one time. 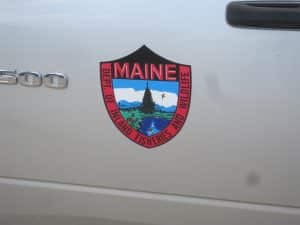 off, Patty and I secured Hinckley and headed up the hill with our provisions and clean laundry from town. We took a couple of pictures to offer a visual idea of what we’re carrying as far as the bags we have and then another picture that shows the contents of the bags. The dining room table was overflowing for our “after” picture and only when about half the stuff was put away did we realize we had forgotten to unpack one of our backpacks which contained a 5-lb bag of flower, large dish washing detergent bottle, a bottle of rice vinegar, a large sweatshirt, and all of our shore-time essentials (computer, wallet, camera, etc). 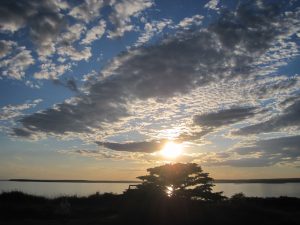 Once everything was put away, we relaxed on the front porch with a 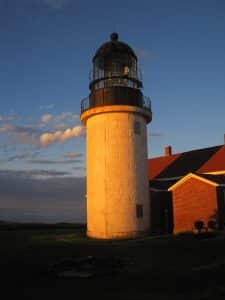 cold drink and just watched the ocean. The winds were calm, it was sunny and warm, and really peaceful. We eventually had some bread and cheese as a light snack but neither of us was hungry after our big lunch and ice cream in town today. And at about 8:15, we watched another perfect sunset. 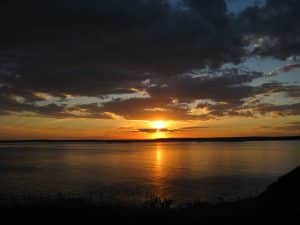 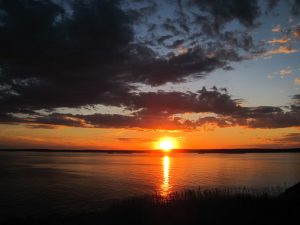 Favorite Moment(s) – Seeing the Zumwalt, meeting Cyndy’s daughter Carney, and talking with Lindsay from Inland Fisheries on the ride to Seguin.