Ship Wreck of the Gondola off Seguin Island – 1890
Shipwreck of the “Gondola” , December 3rd, 1890
185-ton Schooner out of St. John, New Brunswick, Canada
Captain Martin and five crew
While anchored off Seguin Ledges during a storm

“During the night of December 3rd, 1890 a heavy gale blew from the Southeast and the accompanying sound of driving rain and booming surf made those manning Seguin Light restless and uneasy.” This quote sets the stage for this fatal shipwreck off Seguin Island. At first light the next day, the lighthouse keepers awoke as helpless witnesses to the impending demise of this Canadian schooner. Anchoring near Seguin Ledges was no place to be with heavy seas opposing the changing of the tide and a persistent gale backing into the Northwest. 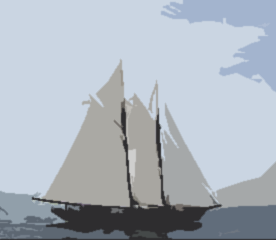 The crew, realizing impending doom, launched the yawl boat. Despite desperate efforts, the whipping winds kept them from the sanctuary of Seguin’s harbor as the gale, now howling from the West, swept them away and out to sea. Meanwhile, the schooner’s broadside caught the exposed rocks and capsized the vessel onto its beam ends upon the cruel ledges. As the Popham Beach Life Saving Station mustered its crew, the captain of the “Gondola” was showing his true grit. Capt. Perez Martin, having attempted to prevent certain peril in the midst of slashing seas and swinging tides, was sighted by helpless onlookers ashore as he now clung for his life upon the hull, signaling for help.

Capt. Haley and his stalwart lifeboat crew from the P.B.L.S.S. could not penetrate the clashing storm swells, now growing wild with ebbing river currents. Drenched and winded no doubt, the saving crew returned to shore to await the turn of the tide. Another vessel saved the five-crewed yawlboat, but the captain’s body was never found. The remnants of the wreck were later towed to Bath by the tug “Seguin” where the ship was considered a total loss.