Seguin has been known to be one of the foggiest places in North America.  The first bell to come to Seguin is not well documented, most likely an 8” bronze bell. Many sailors complained that they could not hear the bell when a sea was running, crashing against the island and its ledges.

In 1858, the Naylor/Sheffield fog bell arrived on the island, accompanied by its own striking system. The bell weighed upwards of one ton and needed to be struck twice quickly every 15 seconds in foggy conditions. Due to the striker consistently breaking and the bell needed to be rung for hours, sometimes days on end by hand, coupled with the dawn of the steam engine lead the US government to invest in alternative methods. In 1870 an elaborate plan to haul coal to the top of the island to run a steam engine to power a whistle was devised. This plan included rain collection cisterns and coal bins to be built on Seguin.

The ten inch steam whistle was blasted every 52 seconds for 8 second intervals. Due to the dense and consistent occurrence of fog around Seguin, a fog signal house was constructed and another whistle was installed in 1876. The use of this signal was so intense the construction of a tram car was implemented and forever changed the characteristics of Seguin Island. The “American Sentinel” of Bath, Maine reported hearing the whistle from 18 to 20 miles away. 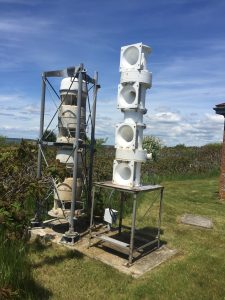 In the 1960s the United States Coast Guard began experimenting with electric fog-horns that could be turned on by electronic sensors. Once the automated fog horns were installed, the USCG had many bells removed from light stations up and down the coast before thieves or vandals could get to them. Through the fine efforts of board member and then President, Ken Young and others, the original bell was found mounted behind the Coast Guard lifeboat station in nearby Boothbay Harbor. The USCG was quite agreeable to returning the bell after a 3 year documentation process to determine it was indeed our bell and it is now on a 99-year loan to Friends of Seguin Island Light Station.

In 2016, the US Coast Guard replaced the fog detectors on Seguin and 17 other lighthouses on the Maine coast to MRASS devices allowing mariners to activate the fog sound signals to be on-demand using a VHF radio while on the water and in line of site of the lighthouse. Using channel 83A and keying the mic of the VHS radio 5 times,