We started this warm and sunny morning with sourdough toast and coffee for breakfast and then did some chores around the house before Ethan’s group arrives late morning.  Patty did some dusting and cleaning in the museum and gift shop and I hung all of our bedding in the sun on the clothesline.  The air is often damp here and it’s sometimes nice to hang our bedding outside to freshen it up a little.

We wrapped things up around 11 to wait for our first visitors either from the scheduled ferry or any that might come in their own boats.  While we waited, we both finally pulled out our Spanish study materials that we brought with us to keep practicing.  Patty is a lot more advanced than me and is reading Buscando a Alaska by John Green who wrote the popular teen book “Fault in the Stars” which she read in Spanish previously.  I started trying to read a book geared towards much younger readers.

Before too long, the first visitors from Ethan’s group came up the hill where we greeted them, directed them to the guestbook, and then took into the tower for a tour.  Besides the initial family of four, we had an additional dozen visitors in the group traveling from Minnesota, California, New York, Iowa, Delaware, Kentucky, and Mumbai, India.  The visitor from Mumbai, Ravindra, was traveling with his son John who lives in Louisville and whose wife is from Maine.  Ravindra now holds our title of visitor from the furthest place, surpassing a visitor from a few days ago that hailed from South Africa.

Once everyone had toured the tower, museum, and visited the gift shop, they moved on to hike some of the trails and explore the rest of the island.  Patty worked on weeding the garden which has sprouted a crop of weeks following the little bit of rain we got yesterday and I repaired an old wooden Coast Guard wheelbarrow that’s been leaning against the house since we got here (and probably a lot longer).  It’s so old, the wheel is made of wooden spokes with an iron band to maintain the round shape.  I didn’t repair it to really use it but I thought it was cool looking and kids might like trying to push it around a little.

After Ethan’s scheduled departure time around 2, we took a break for lunch and had tuna fish sandwiches.  We still didn’t have any additional visitors when we finished eating so we went down to the Whistle House workshop to finish the sign we started recently – we’re going to put it outside the tower door and it will have a reversible “tour in progress” sign to go along with the “do not enter without a caretaker” sign.  We haven’t had any problems with tours but sometimes people drift in after we’re already up top and we’d like to try to control that a little better and keep the groups to a small number.

While Patty was lettering the new sign and I was painting the stand, an extended family of six from Philadelphia & Pittsburgh arrived and found us down at the Whistle House.  We walked up to the house with them and showed them the museum and up the tower for a tour.  Patty’s from Philly originally and we lived in the Philly area until a little over five years ago so we chatted an especially long time with the Philly contingent of this family.

Shortly after they left, a couple who had sailed in and moored earlier in the day came up for a tour and to visit the museum.  They guy had been to Seguin before in the 80’s but his companion had not and they both really enjoyed learning all about Seguin.  After spending a long time in the museum and then giving us tips on breweries to visit (Ebenezer’s in Brunswick and Sea Dog in Topsham), they went out to hike the North Trail and we went down the hill to do a few things.

First thing we did was clean one of the historical markers, this one in the camping area.  The extremely agitated gull is still there so cleaning the sign was a two person operation – me waving a hiking stick around above our heads while Patty cleaned.  This one gull is relentless…  We also patched a leaky hose which we’ll probably need to replace because it just keeps sprouting two new leaks for every one we patch, got water, and a few other things.  We took a quick look down into the cove to check on Hinckley (it’s always nice to make sure the dinghy’s still there) and to see if there were any other boats besides the sailboat of our visitors hiking the North Trail.

There were no other boats but I saw that the dinghy of our current visitors was totally swamped and about 10 yards offshore.  Hmmm….  That’s weird I thought.  I went down to the beach to look closer and saw they had tied their rope to a rock.  About a 10lb rock.  And there was a line in the sand where the rock had been slowly dragged toward the water as the tide came in.  The rock was just visible when the waves receded and it was still moving slowly away from shore.  We knew the visitors weren’t likely to be back soon so we took our shoes off and started pulling the dinghy back towards shore.

We weren’t sure at first if we could get it because it was almost completely underwater and even as Patty bailed with a bucket, waves crashed over the boat refilling it.  Slowly, very slowly, as Patty bailed, I was able to pull the boat up the beach using the waves to float it just enough to be able to drag it.  Eventually, we pulled it up enough for the rope to reach a big tree trunk that’s on the beach above

the high tide line.  With it tied, we could bail faster without having to simultaneously hold the boat to keep it from sliding back into the water.   And, of course, just as we got all the water out and some of the sand (it had a few inches of sand in the bottom in addition to the water), the visitors returned.  They had seen their

dinghy from the North Trail and knew they’d have some work to do.  Needless to say, they were pleasantly surprised to see we’d already done the work.  Moral of the story – the tide rises fast and high here; pull your dinghy up high and tie it to something that’s not going to move. 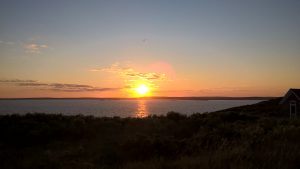 After that little unexpected adventure, we went back up the hill, finished the new sign and put it in front of the tower.  Later, Patty made sautéed scallops, roasted cauliflower with a Sriracha marinade, and some fresh bread for dinner.  After dinner, we had one of the best sunsets we’ve seen so far and, considering the awesome ones we’ve had, that’s saying something.

Favorite Moment(s) – finding our visitors swamped dinghy and being successful in getting it back ashore and secured, and having time to have a long chat with our new ‘visitor from the furthest place’ and his son. 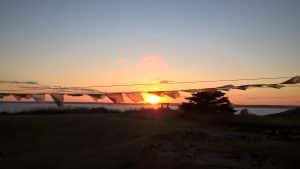 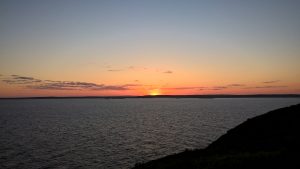