We woke up extra early for some reason this morning and enjoyed our coffee inside because the winds from yesterday were still blowing. It was overcast but we could see sun to the northeast and east and hoped that we might get some sunny, calm wind weather later today. We

enjoyed a breakfast casserole that Patty made with eggs, tater-tots (left by our friends D-Lo and Scott), mushrooms, asparagus (from dinner earlier), cheese, and, of course, hot sauce.

After breakfast, I went down the hill to cut the grass around Paco’s (Donkey Engine House), outhouse, tram, etc. Cutting the grass up where the Lighthouse Trail starts to head into the woods wasn’t bad at all but the closer I got to the cove, the stronger the wind was blowing. I ended up with lots of dry grass up my nose and in my eyes. While I was down the hill, Patty was in the guest quarters thoroughly cleaning and organizing everything – kitchenette, bathroom, and bedrooms.

fridge – cheese, olives, Tabbouleh salad, and probably some other stuff I’m forgetting. We usually sit in the kitchen to eat because it’s bright

and cozy in there and also has a nice view. It also is the room where the wind howls the loudest so we had that to accompany our meal along with a view of seagulls being bounced around on the currents.

gray porch paint last week. The paint took forever to dry but they were finally ready to install. I found a jack in the boathouse and carried it up to use to raise the bell just slightly to insert each 4×4 “leg”. The jack was pretty heavy, maybe 20 lbs., and awkward to carry but I figured it would be the perfect tool for the job so it would be worth it. Well, once I put it down by the bell I (a) realized it was too tall to fit under the bell and (b) the bell was attached the frame in such a

way that had I tried to use it, I would of ended up with a liberty bell replica….a bell with a big crack. As I noted in a prior blog post, I should have started with Plan B which is what I moved on to and it worked fine. The bell is now supported by four matching, painted, legs and looks a bit better than before.

While I was messing around with the bell, Patty fashioned a “do not enter” sign

out of salvaged rope and buoy that washed up. The lighthouse has two levels of catwalk – one that visitors are allowed to access and a second, higher level, that they (and we) are not supposed to access. The ladder up from the first to second level used to have a sign, rope, or something but it’s not there now. We had a group recently that started to climb the ladder up and we realized we better get a sign up lickety-split so it’s obvious that it’s a no go area.

festival in Tennessee. If you’re not familiar with Bonnaroo, it’s a music festival

that attracts close to 100,000 people with multiple stages and tons of different artists. Think a modern Woodstock. He camped there and saw lots of different bands including The Steep Canyon Rangers that hail from our hometown of Brevard. Matthew did his Electron Music DJ thing and got to play a set from 2am-4am on Saturday night. He had a great time and loved everything, even being hot and dirty. It was fun hearing all about it and we look forward to seeing some pictures or video of him playing his set.

For dinner we had a fish salad that Patty made with the Mackerel that Ethan gave us the other day. I made a sandwich out of it and Patty had it on top of a green salad. As we

were cleaning up after dinner, we were surprised by the spectacular sunset show that the sun and clouds combined to put on for us. It was really dramatic with huge dark clouds along with orange and pink sun reflections. On top of that, we had about a 2/3 full moon rising above the lighthouse. It was still windy as could be outside but it was worth it to go outside to watch the sunset performance and try to capture a little bit of it in pictures. 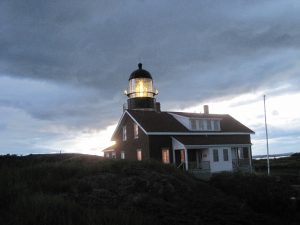 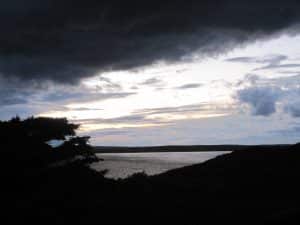 Favorite Moment(s) – sunset of clouds, sun, and the moon