The wind kept up through the night and this morning it was still blowing pretty hard.  I tried to convince myself that it had let up a little but the weather station told a different story.  It looked like there wasn’t much chance of visitors today although Ethan was planning to bring an engineer out to do an inspection and assessment of the building foundations for F.O.S.I.L.S.  We heard a small craft advisory for the entire coast of Maine on the VHF radio so we weren’t sure we’d see him either unless the weather improved.  But it was nice and warm inside as we had our morning coffee and a breakfast of eggs with sourdough toast.

After breakfast, we went down the hill to fetch a pail (or two gallon jugs anyway)

of water from one of the big jugs in Paco’s.  The wind was blowing from the southwest so the cove, located in the north side of Seguin, wasn’t too windy.  While we were down there, Patty went to check the gull in the camping area to see if she was still as agitated as yesterday.  The answer is yes.  There’s an egg outside of her nest, maybe a few feet away, and we’re not sure what that means.  Is that egg hers?  Was it not viable?  Did some other creature try to snatch it (there any not critters on the island and it seems like a snake would just eat it)?  Mystery.  Whatever her deal is, I hope she gets over it soon because she’s being really aggressive.

We walked the Cobblestone Trail too while we were down there and picked up a half-dozen pieces of driftwood for some projects we want to do.  When we got back up the hill, we used two of the pieces of driftwood to add a shelf to a table that’s in the vestibule.  Our shoes,

boots, and sandals are always in a pile under and around the table but the new shelf will give us a place to put them away a little more neatly.  It probably doesn’t sound like anything important but visitors come into the vestibule to go into the museum and it didn’t look great plus someone could trip over one of my big boats.

We did a few more small things – replaced a string of lights with mostly burned out bulbs in the gift shop, touched up the paint on markers outlining the assistant caretakers house near the Whistle House, re-secured some deck boards on the top tram platform, and, most importantly, Patty trained me on how to record a sale in the gift shop.  I haven’t done that yet and wanted to make sure I knew what I am supposed to do cause it’s gonna happen one day soon.

We stopped for lunch but weren’t that hungry after our big breakfast so we just had tomato, lettuce, and swiss cheese sandwiches with coleslaw leftover from last night.  We did a little house cleaning and blogging afterwards.

ground stake next to the base of the tower but the cable broke recently one night when it was really windy.  The cable is supposed to ground the lighthouse in the event of a lightning strike.  The top 10’ or more of the cable has been just swinging free while the bottom piece is attached to the ground stake and lying next to it.  It’s something we’ve been looking at and thinking we should do something about – we’d like to fix it by replacing the cable but I think the Coast Guard is planning to do that.  In the meantime, we went up in the tower and coiled up the piece that was hanging and secured it to the catwalk railing.  Down on the ground, we did a similar thing to get it up off the ground and secured to the side of the tower.  It at least looks a little better for now…

Patty started marinating some chicken while I called my Dad to wish him a belated Happy Father’s Day.  I wasn’t able to get a signal yesterday – the wind sometimes seems to affect our ability to get a good signal.  I also missed a call from our son yesterday but we were at 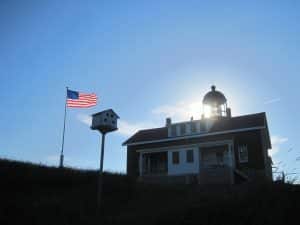 least able to text each other….not an option with my Dad!  He and my Mom were happy, as always, to hear from me and wanted to know all about our recent days on Seguin.

Before dinner, we went down the hill for water again and the wind had really picked up.  It was still coming from the southwest but it was strong enough to even be really blowing down around the cove.  When we got back up the hill, we had dinner – buffalo chicken, broccoli, and homemade baked mac & cheese. 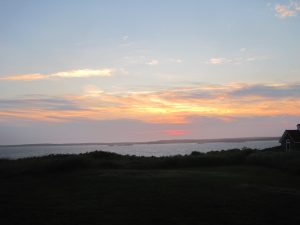 Today was the summer solstice and also a full moon known as the “Strawberry Moon”.  We had clear skies and watch it rise over the ocean with a pretty pinkish hue (even though the name apparently refers to strawberry season and not the color).   It was a beautiful moon-rise and sunset on the “longest” day of the year.  Our view of the sunset has now reached the farthest northerly point and from now until the end for the summer, we’ll see it set a little farther to the south each evening.  Sunrise will come a little later too!

Oh yeah, the engineer didn’t make it to Seguin today.  I’m guessing the

seas were too rough but we’ll likely see him another day.