Rainy Day on the Rock

The forecast for today promised rain, wind, and fog and it did not disappoint. We started the day with limited visibility, gusting winds, and intermittently heavy rain. After a breakfast of yogurt, fresh fruit, sprinkled with granola, Patty and I got started setting up the gift shop.

The Keeper’s Quarters building is divided into two halves. Facing the front of the house (back to the 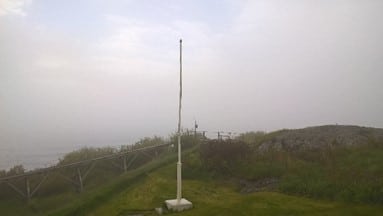 east, looking west), there is a vestibule in the center of the house with two doors behind it, side by side. The door on the left door leads into “our” side of the house – the first floor consists of a living room, dining room, kitchen and small storage nook at the top of the stairs to the basement. Upstairs there are two bedrooms and a bathroom with a composting toilet, sink, and tub/shower. The right door leading into the house opens to the Seguin Island Light Station Museum designed and curated by the Friends of Seguin Island Light Station (F.O.S.I.L.S.). The museum has two rooms with photos, old newspaper articles, a sample bulb from the light tower, and lots more. The displays do a really nice job of explaining the history of the light station from the commissioning in 1795 to the present. In the back of the first floor, accessible from the museum and an exterior door, is the gift shop where we will offer t-shirts, hats, postcards, and other merchandise that helps to fund the F.O.S.I.L.S. mission. There are guest quarters on the second floor on the right side of the house that members of FOSILS can pay to stay in during the summer season. Similar to our side of the house, there are two bedrooms and a full bathroom.

So, getting back to what we worked on, we had a half dozen or so bins of merchandise that were brought over on Saturday that we needed to unpack and organize at our discretion. So, we first cleaned the gift shop room and then started unpacking the merchandise and figuring out what we had and how we might want to display it all. Patty took the lead and I pretty much just handed her things and did whatever I could to help her once she got on a roll. By early afternoon, we had everything pretty well setup. We’ll get more merchandise either tomorrow or next Wednesday but we’re ready now with what we have to open the gift shop if we get visitors over Memorial Day Weekend.

We took a break for a late lunch of leftover pasta with calamari after which we moved on to a couple of things down at the Whistle House which houses our workshop and the coast guard mechanical systems for the light and fog horn. In the past, the fog horn automatically started sounding whenever there was fog and would continue sounding regularly until the fog lifted. Recently, an on-demand system has been implemented whereby boaters can signal via VHF radio to activate the “horn.” Since it was a foggy day, we decided to test the horn – it did go off but Cyndy said it wasn’t as loud as it should be. I called the Coast Guard to let them know and they asked us to check a couple of things. There are two separate structures, each with multiple “horns”. One stack is the primary and the other stack is secondary that only activates when the primary fails. We put in ear plugs and checked to see which were sounding which was pretty cool – they’re close together and pretty loud so feeling the horn was a better way to tell which was working and which wasn’t. With that info, I called the Coast Guard again. Tentatively, they said they’ll be out within the next two weeks to do a regular inspection of the systems and will bring spare parts to fix (we hope) the fog horn so that the sound will carry as far as it should. We really hope we’re here on-island when the Coast Guard comes and not on our day off because they come by helicopter and we’d love to see that and have pictures and video for the blog.

We also spent time with Cyndy inside the Whistle House going over all the tools and where everything is supposed to be stored. The workshop is super well equipped with a table saw, chop saw, compressor, circular saw, sanders, painting supplies, gardening/trail grooming tools, etc. etc. Pretty much everything we should need to handle any day-to-day maintenance this summer. Maybe even a few fun side projects that we have in mind. 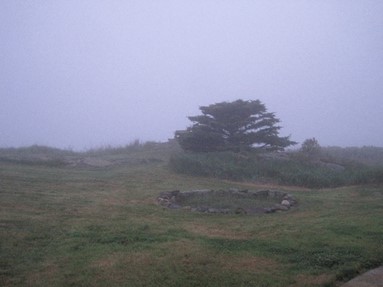 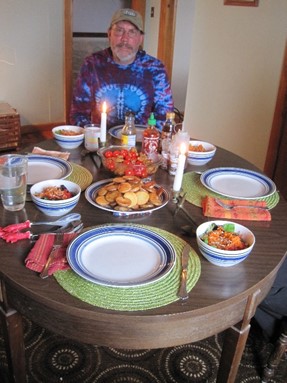 We all enjoyed a dinner of chicken and potatoes prepared by Michael and a salad Patty made followed by heated up strawberry rhubarb desert left over from last night. I texted with Ethan earlier in the day to find out what time he plans to pick us up in the cove tomorrow morning for our day off-island. 7am.

Patty and I did our best to finalize our shopping list consisting of things we need (food and supplies) and things we need for the island. We’re not super great at planning, or at least following a plan, but we feel pretty much ready to be down at the cove in the morning to do our thing on the mainland.