We slept in this morning ‘til 7:15 which is late for us with the sun rising so early.  By then, we’d already missed over two hours of daylight!

After breakfast, we headed outside to mow the upper part of the property – Patty was on the riding mower and I had the push mower to hit all the areas she can’t get to safely.  When we were finished mowing, we had some raking to do again.  The grass is really thick and we still haven’t gotten it trimmed smoothly everywhere so we’re still doing rake cleanup.  The grass is also pretty brown around the house because we cut so much off at first and haven’t had a lot of rain.

Several days in the upcoming forecast call for rain which should help if it actually happens.  The weather we see on Seguin and the weather that’s predicted don’t seem to have much in common most days although we faithfully check the weather daily as if it does.

We took a break for lunch and had fish salad sandwiches with the Mackerel Ethan gave us yesterday.  Patty mixed it up with carrots, celery, onion, and a little mayo & Dijon mustard.  On a fresh sour dough bread from the natural foods store along with lettuce, tomato, and lettuce, it made for a delicious lunch.  Best of all we have some fish salad left over for a snack on crackers or something later on.

After lunch, we cleaned up our mowing gear and returned everything to the Whistle House and got out the gardening tools.  In the garden, I finished turning all the soil with a shovel after which, Patty and I used

many of the weeds as we could.  The weeds that took over the garden over the winter were hardy and it took us quite a while to get the soil ready for planting.  It probably took us an hour or two even though the garden is not very large, maybe 12’ in diameter.

When we were ready, Patty divided the circular garden into eight separate planting areas, two squares in the middle where she planted carrots and beets.  As spokes around center, she planted six more areas with salad blend lettuce, butter crunch lettuce, mesclun, chard, spinach, and kale.  While she planted, I got some grass clippings (we have lots) and made some narrow paths between that will allow us to reach all the areas of 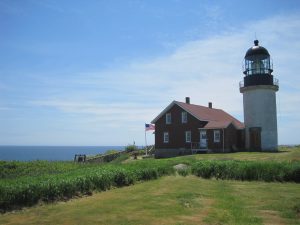 We put everything away down at the Whistle House and headed inside for nice, hot showers.  Today was windy and probably the chilliest day we’ve had since arriving on Seguin.  It was the first day I needed to wear a jacket outside for the entire day.  We had the heater going on high too as soon as we came inside which we don’t usually need until the sun goes down or first thing in the

morning.  Because of the overcast skies, we didn’t have a sunset to watch tonight but we can’t complain about that since we’ve had so many spectacular ones already.

For dinner, Patty prepared scallops from Plant’s Seafood in Bath, broccoli, and warm bread.  The scallops, seared in our cast iron pan with butter, olive oil, garlic, and pepper were perfect.  Delicious.  It’s probably sacrilege to say in Maine but we both might like them better than lobster.  We have four or five left over that will go well with our left over Mackerel salad from lunch.

Later in the evening, the sky cleared a bit for a while and I caught a really good view of the stars from our bathroom window.  On some clear night in the future, we want to find a good place on Seguin away from the light to watch the stars.