We woke up at our normal Wednesday time of 5:30am to be ready for Ethan and the Wednesday Warriors to arrive in the Cove at 7am and our day off-island.  As we’ve done the past few weeks, we headed down to the cove a few minutes early to have time to sit on the beach and have our coffee there before it’s time to leave.  The morning was sunny, the winds were calm, and the seas just had some gentle swells.

We didn’t have much to bring to the mainland (no gas containers and only two water jugs) so we only needed a single dinghy ride to get our stuff aboard Ethan’s boat.  There were six Wednesday Warriors including the regulars Cyndy, Rick, and Ken plus three we had not met before – Ben, Deb, and Tom.  Julie (who’s been out every week so far) didn’t come this week because we made plans to meet her for lunch.

As we headed towards Popham, it sure looked as if our Wednesday good weather record would hold up for another week – I didn’t even have a jacket on for the ride over.  Once on the mainland, we did our regular errands – water at Cyndy’s, laundry, grocery shopping, and a stop at the hardware store. Afterwards, we met Julie for lunch at Schutty’s which is a seafood food truck with some picnic tables that’s a few miles from downtown.  The food was good and the weather nice as we ate under a sun umbrella at one of the picnic tables but dark clouds were starting to move our way.  Uh oh…

After lunch, we made our weekly stop at Dot’s for ice cream and then met our friends Terri and John who will be staying with us on Seguin for the next several days.  We met them at the Maritime Museum just as it started to rain and they followed us down to Popham for the ride over.  We thought we had explained the deal with getting to Seguin, the hill, etc. but I

don’t think we did a very good job because they had a lot of stuff.  A whole lot.  Especially lots of food especially which we weren’t going to turn away.  As we made our way towards Popham, the rain turned into a pretty steady downpour with the rain coming down hardest as we pulled up to the dock.  We were running a little late and Ethan was anxious to get going as the four of us shoved all our stuff into plastic garbage bags to try to keep things dry on the way over.  Before long, with the boat loaded down with us and our stuff, we pushed off for the ride to Seguin.

Approaching the cove, the rain let up and by the time Cyndy came out to meet us in the Hinckley (the dinghy), it had stopped completely and the fun began.  The dinghy shuffle this week was one to remember and I’m sure the Wednesday Warriors all got a good laugh at the amount of loot we were taking ashore.  Two big coolers, a case box of one-gallon

water bottles, two water jugs, backpacks, bags upon bags upon bags of food and drink.  I think it took us four or five trips total but we finally got everything to the rocky beach (oh yeah, it was high tide) and then up the hill to Donkey Engine House area.  On one of the dinghy runs, I thought we were just going to go in circles instead of towards the shore because the cooler between my legs (and hanging off the stern) was so big that I could only freely move one of the oars.  Surprisingly, we

were able to get everything we brought ashore to the top of the hill in just a couple of (very difficult) trips up the trail.  We have one well stocked house right now!

After we unpacked, things were put away, and Terri and John were settled into our guest room, we gave them a tour of the tower and shared a few drinks as we showed them around.  Like Patty, John is a wonderful cook and with Terri as his sous chef and Patty helping with showing them where to find what they needed, they made a delicious mean of Chicken Francaise with carrots and rice.

We enjoyed a beautiful sunset and the rest of the evening together with lots of laughs and storytelling.  It was a very good day! 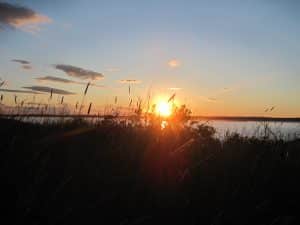