One Busy Day on the Rock

Home » Blog » One Busy Day on the Rock

Saturday broke with sunny skies and calm winds – we’re getting spoiled by the weather since Wednesday’s brief rain.  Patty whipped up a heapin’ helpin’ of scrambled eggs and bacon for the two of us and our friends Terri and John who are visiting from New Jersey.  Terri is a childhood friend of Patty’s and John is her significant other and together, they are loving their time on Seguin and chipping in wherever they can.

Just after breakfast, three young ladies arrived from Pond Island which is situated

between Seguin and Popham.  Pond is a much smaller, mostly rocky (maybe all rocky?) island with an automated lighthouse that is smaller than the one on Seguin.  There is an ongoing study of tern migration (artic terns and one another type that I can’t remember) that these three are involved with in their work for the Audubon Society.  One of the visitors (Robin) is on Pond for the whole summer while one of the others is there for a couple of weeks and the third oversees six additional locations besides Pond.  It was really interesting talking to them and their living conditions make ours seems positively luxurious.  Like us, they have to bring 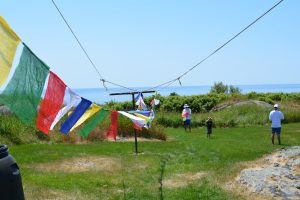 drinking water from the mainland but they also have to collect rainwater for bathing and washing dishes (it hasn’t rained much lately, hence….) and have limited electricity.  They also live and work in tents 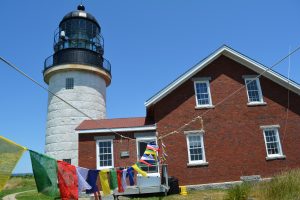 that are along the rocks shores, exposed to wind, rain, and sun.  They were really excited to visit Seguin and go up in the tower after seeing it just across the water from their home 24/7.

Just after they left, we had two more visitors from Montreal that keep a sailboat in Maine and sailed in for a visit.  We seemed to have a lot in common with them and spent a long time chatting must-see places in the area following our summer on Seguin.  Although their primary language was obviously French, unlike our visitors yesterday, we were able to have an in-

depth conversation on lots of different topics.  After their tour, they planned to hike the island a little while waiting for better winds to sail.

For most of the remainder of the day, we were busy with a steady stream of visitors.  Ethan brought 24 on his boat followed by an extended family of 9 from DE & CT that have been coming to Seguin

for twelve consecutive years.   We had a couple from a town in Virginia near where I grew up in Williamsburg and we even had a mutual acquaintance.  We met two families, totaling ten, traveling together and besides just wanting to visit Seguin, I think the two parent couple were doing friendly reconnaissance on the place – they have reservations to stay with us in

the Guest Quarters in early July.  They’ll be our first F.O.S.I.L.S. guests and we’re looking forward to having them here.  Things quieted down for a bit and then we had three guys come up that were sailing the area and thinking about mooring overnight in the cove although I think they ended up moving on.

Terri and John mingled and chatted with a lot of the other visitors and, small world, found several that were from the same area as them (and Patty), had similar experience growing up, or common remembrances of places and events.  They also took a hike to the end of the North Trail where I

think John spent a lot of time being the target for seagull dive bomb attacks while Terri tried to capture just the right screaming bird photo.  They made it out of there unscathed but we could tell when they were heading back our way by the flock of gulls circling over the trail.

Our friend Jude from back home in Brevard sent us a care package that we picked up Wednesday at Cyndy’s and finally made full use of.  She included two scones from our local bakery (ok, they were gone on Wednesday), a new ball cap for me from a locally owned Brevard outdoor goods store,

a vest Patty coveted, and two sections of Tibetan flags.  Patty coveted the vest from the outdoor store but didn’t buy it before we left to her regret – it will easily hold a camera, her VHF radio, notepad, and whatever else she needs to carry.  I really needed another cap (Jude must have ESP!)

because the one I brought is falling apart, and we both wanted the flags to spruce up the clothesline area and generally bring us good vibes.  Thank you Jude!  You are so thoughtful and kind.

Last Wednesday, the Wednesday Warriors brought out a composter that someone donated to F.O.S.I.L.S. for the island and we set it up next to the kitchen door.  It was black with a pressure treated frame

and, while we’re thrilled to have it and it will be great for the garden next year, it looked very utilitarian.  Patty came up with the brilliant idea to paint it to look like a giant lobster buoy so she and John set about finding a good paint combination and painting it.

Meanwhile, I was doing something, not quite sure what, and walked into the living room and smashed my pinky toe into a rocking chair.  It hurts, it’s purple, and maybe it’s broken.  It wasn’t beer o’clock or anything like that, just clumsiness I’m embarrassed to say.  No good story to go along with it but anyone that wants to suggest a colorful one to me, please do and I’ll use it.

While I was crying about my toe and John and Patty painted, Terri got some veggies

marinating and later, cooked them with John along with London broil, on the grill.  It was yet another delicious meal (I need more adjectives that don’t sound too silly).  We stuffed ourselves and still have a ton of food leftover for more meals which is perfectly fine with us.

We had a fantastic sunset show after dinner and then ended the night listening to Terri strum the guitar, enjoying a few cocktails, and good conversation and friendship.  They’ll be leaving tomorrow and we’re going to miss them.  We’re hoping they might come for another visit in late August but, if not, we’ll have the chance to stop to see them for a visit in NJ on our way back home to North Carolina.

BTW – there are more pictures at the end of this post, more than usual, because it’s the last day of our monthly WiFi hot-spot contract and we have extra bandwidth to use before midnight! 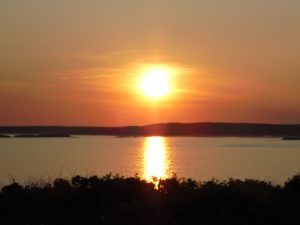 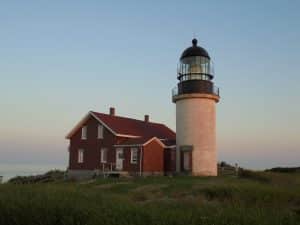 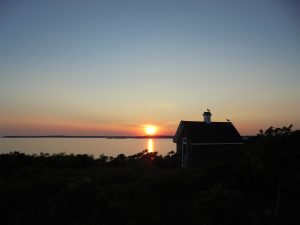 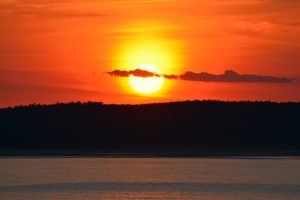