We started off the day with coffee and then some fresh fruit, yogurt

and granola for breakfast. Shortly afterwards, we saw Godiva (the dog that visited recently) and her owner walking across the back lawn off the kitchen. They spent last night on their sailboat moored in the cove and were taking an early warning walkabout. We chatted for a while until they were ready head down the hill and get underway. There was no wind and, besides giving Godiva a chance to run a little, he was also killing some time hoping some wind would kick up so they could go for a sail.

After they left, we went down to the Whistle House to start working on a new foot-board for the bed we’re sleeping in. I’m about 6’2” or 6’3” and the bed has a foot-board that’s higher than the mattress which means I don’t quite fit unless I lay down without bending my legs. I guess I’ve been commenting (or complaining) about it enough to 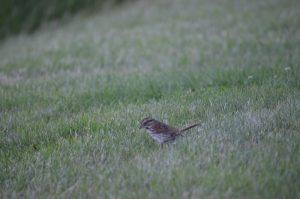 Patty that she finally said, “come on, let’s make a new foot-board” that will be shorter. So, with measurements in hand, we rooted through the scrap wood bin and found some lumber to meet our needs. We got our initial cuts finished and carried the wood and tools we’ll need up the house when some visitors were coming up from the top of the Lighthouse trail. 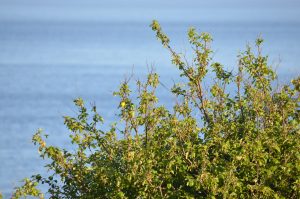 Ethan had just arrived with a group of 21 visitors that were making their way up the hill in small groups. I opened up the lighthouse and Patty did the same in the museum and gift shop. I must have briefly disappeared somewhere because when I had my first group ready to go up the tower, Patty was already up there with another group. After they came down, I took over the tours and she headed into the gift shop to greet visitors there, answer any questions they might have about trails or anything else, and to make sure we had them signed into the guestbook. One woman and her friend were especially interested in knowing more about camping on Seguin and Patty and I both talked to her awhile about that. Also in the group was a young guy named Brook and his mother Sarah – we happened to meet Sarah on our first Wednesday off at the Starlight Café where we stopped for lunch. She overheard us mention Seguin to another couple we met and introduced herself and said Brook worked for Ethan the past two summers. It was nice to see Sarah again and to meet Brook.

When the group of 21 started making their way down the hill for Ethan’s scheduled departure, we stopped for a lunch break and had leftover burgers with lots of toppings. We headed down the hill afterwards to get some potable water (we’ve been carrying it up 2 gallons at a time) and saw that Ethan was just pulling away and a dinghy was heading to shore from one of the sailboats moored in the cove. We headed back up the hill and not long after the couple from the dinghy reached the top of the hill. They were caretakers of an island (not a lighthouse)

near Boothbay for fifteen years and were out for a sail with their two dogs. It was interesting talking to them about their caretaking experience and the island where they lived and worked for the five families that owned the island. They came ashore mainly to let their dogs run but decided to take a look around – even though they had sailed by here many times, they said they had never actually visited Seguin. We gave them the full tour and I think they thoroughly enjoyed it and will come back in the future.

When they left, we returned to the bed project and worked on that until four more guests arrived. We did the meet and greet routine, offered a tour, brought them into the museum and gift shop. One of the visitors was pretty winded from the hill and struggled a bit on the steps up the tower, neither of which is that unusual. But then her husband told Patty that she had both hips replaced four months ago! In light of that info, we were really impressed with how well she did physically. The hill is not an easy climb for most people. One of the four in their group decided not to climb to the top of the lighthouse, staying outside instead to take pictures of the other three on the catwalk.

When they left, we finished attaching the new foot-board to the bed frame, put the box spring and mattress back on, and made

the bed. I have to admit I am looking forward to stretching out on it tonight. For dinner, we had sautéed scallops with broiled cauliflower steaks marinated in a Sriracha-based sauce.

After dinner, I was heading towards the tower to take some sunset pictures from the lighthouse catwalk and saw a lone visitor walking towards sunset bench. I went out and greeted him and asked him to join me up in the lighthouse. I gave him an abbreviated spiel on the way up because we only had a 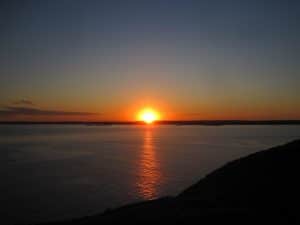 few minutes until sunset. Patty joined us a few minutes later and we all enjoyed the show together. Jim (our visitor) lives in Portland but keeps his sailboat in this area. He was out for a few days and planned to stay the night in the cove before moving on. After sunset, he headed down to his boat but promised to return in the morning to see the museum and spend a little more time on the island.