Our friends John & Terri went fishing this morning so we were all up early for their 7am pickup by Ethan in the cove.  I rowed them and their rods and gear out to Ethan’s boat and then Patty & I watched from the beach as Ethan took them back towards the Kennebec River

to fish for Striped Bass.

Patty and I returned to the house afterwards and found the liquids in our composting toilet (in the keeper’s quarters) overflowing.  Without any more details, it took us quite a while to clean up and it was kind of yucky!  I’ll also note that we both showered right afterwards…before breakfast.

We’ve been eating a lot since Terri & John arrived and weren’t too hungry so we each just had an English muffin.  We might have skipped breakfast altogether or waited until later but since we’re never quite sure when visitors might arrive, we try to take the chance to eat when we can and when we don’t have to rush.  As it turned out, we didn’t have any guests until later in the morning so we caught up on some cleaning and other little chores around the house.

Terri and John were set to return on Ethan’s boat around 10:30 and texted a little before to say they caught fifteen fish total but none were keepers because they were not big enough.  A little before 10:30, we went down to the cove to untie Hinckley and wait for their return.  When we got down there, a very nice sailboat was moored in the cove and three occupants were rowing ashore in their dinghy.  We helped them land and did our best to welcome them, introduce ourselves, and tell them about the island but since they didn’t speak much English and we don’t speak their native French, there was lots of pantomime involved.

Patty thought it would be best to accompany them up the hill just because we weren’t sure what they were getting from us regarding Seguin so she left with them while I waited for Ethan’s boat.  On their way up the hill, Patty learned that our guests are from France (we guessed Quebec initially) and are sailing the coast of Maine for three

weeks – a couple they are friends with owns the boat and that couple sailed it from France and was currently visiting family in Minnesota giving these folks the chance to borrow the boat.  Or at least Patty’s pretty sure that’s the story.

When I saw Ethan’s coming towards the cove from beyond Ellingwood Rock, I pushed off from the beach and met them near the Coast Guard mooring just as they came in.  John and Terri climbed into the dinghy and we headed back to the beach.  They told me all about where they went (about half-way to Bath up the Kennebec), their catch, and the biggest 25” striper that was just short of the 28” minimum.  They had a great time, had perfect weather and seas, and especially enjoyed spending the morning with Ethan exploring local fishing spots.  We knew they would.

When we reached the beach, I was rowing in stern first (so any waves will break over the bow and not swamp the dinghy) and Terri was sitting on the stern. Just as she stood up to get, a wave picked us up a few inches and then push us a bit higher up the beach.  Before I could say wait or hold on or anything, she did a half-somersault backwards out of the boat.  After a moment of stunned silence all around, she got up and was no worse for wear other than being soaked on one side.

Whew, that was almost bad!  Luckily it was low tide and we were on the sandy beach and not on the rocks.  I’ve seen this or some variation of it happen a few times although I’ve never been in the dinghy myself at the time.  When I’m rowing, I think I need to be more aware of the swells and pre-warn any passengers to sit tight until we’re between waves.  Live and learn….it’s new to me too!

When Terri, John, and I reached the house, Patty was finishing her tour with the French guests but was going to walk back to the cove with them because they had purchased some things from the gift shop and wanted to make a donation but had forgotten to bring cash ashore with them.  Between the three of them, they found some Euros but no US cash.  Maybe we would have taken the Euros a few days ago but with the Brexit vote and all….  No, really, we didn’t have any other visitors and Patty didn’t want to turn away a sale or donation so she accompanied them back down the hill and waited ashore with one of the visitors while the others rowed out for some money.

John and Terri got cleaned up after their fishing trip and then made two pizzas for lunch with crust they brought with them.  One was goat cheese, red sauce, and pepperoni and the other was mozzarella with red sauce.  Both were delicious.  We sat out back at the picnic table eating pizza along with a green salad and fruit salad hearing more about their fishing excursion, where they went, and what they saw.

Later in the afternoon, Ethan returned with a group of eighteen Boy Scouts from Troop 51 in Boxwood, Massachusetts.  Ethan took them fishing around Seguin and then some of the Troop came up the hill to tour the museum and lighthouse.  For several years, they’ve been doing this same trip where they camp in Popham and then visit Seguin and go fishing.  The boys were all really polite and nice as were

the chaperones even if the boys were more interested in throwing around a Frisbee than hearing the history of Seguin.  I think the adults were just happy that the boys had a chance to run around and burn off some energy. 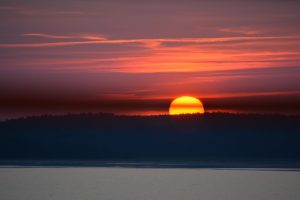 After the Troop left, Patty made some chocolate chip cookies (my baking career has stalled at one batch of oatmeal cookies) and later John prepared homemade meatballs with a red sauce and pasta.  We had that for dinner this evening along with Parmesan cheese, salad, bread, and then cookies for desert.  Following dinner, John spent some time outside taking sunset and later moon & star pictures while Terri played some guitar and we all sat around together in the living room. 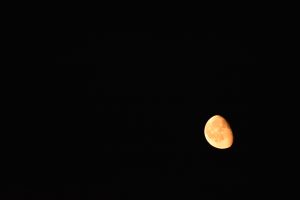