We started the day with a breakfast of bacon and eggs and figured out how to attack our chores for today.  We needed to cut the grass down below but it was still a little foggy and wet outside so we did a few small chores before starting to mow.  Among them, I fixed the kitchen door which has been sticking badly since we got here.  We had already fixed the screen door but the main door was such a problem that Cyndy said she had a bruised hip from checking it every time she needed to come inside.  The problem was a partially rotted door frame allowing the hinges to sag a little.  Down in the Whistle House, I found some 4″ galvanized screws that did the trick.  It’s not perfect but the hinges are now securely attached to the framing behind the jamb and the door now opens and closes with (relative) ease.  While I was monkeying around with the kitchen door, Patty rehung the Gift Shop / Museum sign made by a prior caretaker.  The sign is actually three separate pieces connected by short chain and screw eyes that all needed replacing.  I did help her finish with the signs (I steal the credit in our pictures) because we needed a little extra height to hang them.

By the time we finished those and a couple of smaller things, we headed down the hill to start mowing and trimming the Cove and Cobblestone Beach trails.  Together, we mowed, weed whacked, and trimmed with shears. It was super sunny and hot by this point and there’s not a lot of air movement in most of that area so I was huffing

and puffing when we saw a really nice boat pull into the cove around 10:30.  It looked like a lobster boat that had been converted into into a passenger boat with a large canvas sun screen stretched from the cabin to the stern.  On board was a large group of young folks who started ferrying to shore in a small dinghy.

Patty headed up the hill to open to change into cleaner clothes and then open the gift shop, museum and lighthouse.  I quickly finished mowing and trimming the area at the top of the cove steps, around the outhouse, and the lighthouse trail access.  When the first few people in the group started trickling up from the cove, I greeted them and then put away our gear and headed up to also cleanup a little and get

ready to meet the entire group.  Shortly after, they all came up from beneath the tram where Patty and I greeted them on the front lawn.  The group consisted of college students and a professor on day 8 of a 15 day adventure in Maine, spending the time outdoors and studying nature and ecology.  Justin, the professor, is from this area and the students are from Manhattan College (most of them are NY & NJ native and haven’t spent much time in the great outdoors).

The group split up in to two smaller groups and while I took one up the tower, Patty stayed with the other in the museum and gift shop.  I found out that Justin almost took a job with Warren Wilson college in Asheville before he accepted his current job and once again, thought what a small world it is.  Warren Wilson is located in the area of Western North Carolina where Patty and I are from.  I shouldn’t stereotype but I guess will…for a group that size and age, they were a real pleasure to host.  Well behaved, 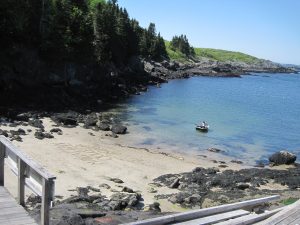 friendly, respectful of Seguin and us, and even brought a few things in the gift shop.  This was our first gift shop sale (well, to folks outside of F.O.S.I.L.S. – Michael, Cyndy, Patty and I all have nice new shirts)!  If all our groups are as fun as they were, our summer is sure to be fantastic!

The group hiked the South Trail and had lunch or a snack before they started to ferry out to their boat again.  One of the group came up to let Patty know they were on their way, so Patty ‘tested’ the fog horn – they were very curious about it, and were excited to hear it.  By then, Patty and I had changed back into our work clothes and were back at it.  I went back down hill to finished mowing and week whacking the area around the Donkey Engine House and tram and then did the same on the Cove Trail, Camping Area, and Cobblestone Trail.  Patty saddled up on the riding mower and took care of everything up top that can be reached on the Gravely.  Once I finished at the bottom of the hill, I worked my way up the Lighthouse Trail, trimming and racking the cuttings while Patty used clippers to trim back the South, Lighthouse, Cove, and Cobblestone Trails.  It was pretty late in the day when we cleaned up our gear and returned everything to the Whistle House.

We had burgers with tomato, onion, jalapeno, lettuce, and fresh guacamole that Patty made ready for dinner.  We even had some warmed totopos for with guacamole as an appetizer.  The idea was to cook the burgers on the Weber gas grill outside but the wind had picked up and was blowing at 15+ mph making that a no go.  Our cast iron pan in the oven worked just fine.  They were delicious! 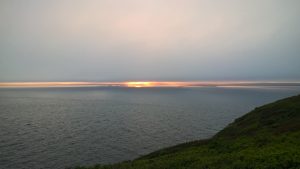 The evening ended with another spectacular sunset.  I think we’ve taken pictures of every sunset we’ve had and each has been different and beautiful in its’ own way.  I suspect we’ll have pictures of just about everyone while we’re here.  It will be interesting to watch the sunset move slightly north each night until the summer solstice and then start to move south again for the rest of the time we’re here this summer.

Favorite moment – The excitement that one of the young men in the group had about some sea glass.  A close second (for Patty anyway)….was being able to open the kitchen door without a workout of tugging and pulling.