Our friend John got up very early this morning to get pictures of sunrise from Seguin Island.  He got a little more sleep afterwards and we all got up later and enjoyed a breakfast of steel cut oatmeal with fresh fruit, granola, pumpkins seeds, etc.  Later, they hiked down the Lighthouse Trail and out the Cobblestone Trail where they spent a couple of hours enjoying the sun and watching the ducks (23 babies and 10 adults by their count) play in and around the cove just south of the beach.  Along the way, they saw other visitors and chatted with them while avoiding some of the dive bombing gulls along the Beach trail.

Patty and I stayed around the lighthouse because we knew Ethan was coming out with a group in his big boat.  His group arrived late morning and made their way up the hill in small groups that we greeted, took on tours in the tower, and welcomed into the museum

and gift shop.  Ethan’s group had 23 guests plus we had another four that traveled on their own to Seguin.

After our visitors departed, we joined Terri & John at the picnic table for a lunch of leftover Chicken Francaise sandwiches, chips with Terri’s mango salsa and Patty’s homemade tomatillo salsa.  The weather was perfect and, knock wood, we don’t have much in the way of bugs to deal with (yet).  All the while we sat and ate, a seagull friend sat on the adjacent rock giving us the eye – I think he’s the same fella that Patty gave a scrap of Mackerel to last week.

After lunch, we showed our friends the Whistle House area and then walked down to the Boathouse to sit on the deck in the sun.  After an hour or more down there, John and I rowed out to the lobster keeper box where Jackson left six lobsters for us yesterday.  Patty and Terri stayed on shore to document the whole thing and play in the surf a little too – the tide was low so there was lots of nice beach to play on.

some very good bread we bought at Bath Natural Foods on Wednesday.  It was really tasty and Patty and I are getting better and better at getting the meat out of the shell.  I really like the whole ceremony of rowing out to get the lobster, putting them into a bucket with seaweed, cooking and cleaning them.  I know our friends did too and that they are falling in love with this place and all it has to offer.

John is an avid fisherman with his own boat at home in New Jersey.  Today, he and Terri made arrangements to go fishing for striped bass tomorrow with

Ethan.  He’s pretty excited to get out on the water first thing in the morning. 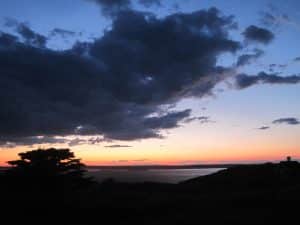 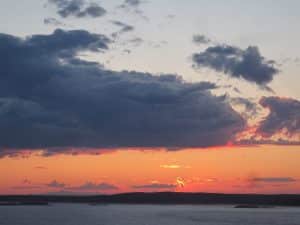 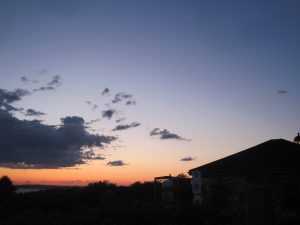 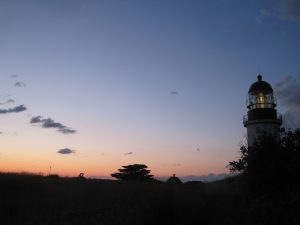