I was up before everyone else and walked down the hill to get more water and check the donation boxes down there for contributions from yesterday’s visitors.  I also checked the outhouse to make sure it was clean and had plenty of paper for today’s visitors.  When I came back up the hill, everyone else was up – Patty was starting to get some food prepped while Terri & John were packing to leave this afternoon.

Patty and I had a big batch of pollo asado made and frozen in marinade, ready to be grilled, with plans to cook it during Terri & John’s visit.  We had so much other food that we hadn’t had it yet but figured it would be just as good for brunch as any other time.  So, as they were packing and Patty warmed tortillas, diced onions and tomatoes, made guacamole, heated black beans, etc. and I started grilling the chicken.

Just as the chicken finished cooking and Patty had the sides ready, our first visitors came up the hill.  They were two couples traveling together, one couple from Chicago and the other local along

with their dog Chloe (we set out the dog water bowl).  We chatted with them for a long time in the museum and outside on the lawn.  The woman of the Chicago couple signed the guestbook and saw John’s entry with Sea Girt, NJ as his hometown….turns out she’s from the same area of NJ as Patty, John, and Terri and worked in Seaside during the summer years ago, probably around the same time that Patty and Terri worked there.

While I was up in the tower with the first visitors, three more, including a F.O.S.I.L.S member and his son and daughter-in-law arrived.  The son and

his wife recently moved from Tallahassee to Maine and absolutely loved Seguin.  They had tons of questions up in the towner and also down in the museum.  They really enjoyed themselves and I expect we’ll see them again this summer.  On their heels was another group of eight from Utah, South and North Dakota visiting a Maine friend.  In another example of small worldishness, this friend was the wedding planner for a couple from our first group.

The first three groups slowly left in small groups until it was just us and our friends left and we quickly set out our brunch at the dining room table.  The timing was perfect and we enjoyed a fairly leisurely last meal together before Ethan arrived on his regularly scheduled ferry service.  Just as we finished up and cleanup was done, the first of Ethan’s group arrived at the top of the Lighthouse Trail.

another group of 9, giving tours, manning the gift shop, and generally doing our keeper/caretaker duties. John and Terry spent the time carrying their stuff down the hill – they didn’t have nearly as much to go back since much of what they brought was food & drink and they generously left behind everything we had not finished.  We’re well stocked for the foreseeable future.  They did add to their load with lots of Seguin gift shop purchases, they wouldn’t want their bags to be too light!  The visitors were all so nice, some even going so far as to offer Terri & John help in getting their stuff down the hill (they politely declined).  The last thing they did before it was time to go was put the finished touches on our lobster-buoy composter by painting on the GPS coordinates of Seguin Island.

By the time Ethan’s group was ready to depart around 1:30, we had no other visitors so we were able to go down the hill with everyone.  I rowed one load of Terri & John’s stuff out to Ethan’s boat in our dinghy while Brook, Ethan’s first-mate, start taking small groups of people from the beach to the boat.  In the end, there was room for Terri & John to squeeze onto the last dinghy group and with hugs and promises to see each other either here in August or on our way south in September/October, they were off.

While Ethan’s group and our friends were doing the dinghy shuffle, we had a couple and their son arrive by their own skiff and a couple who sailed in rowed their dinghy ashore.  The family in the dinghy was from a local island where they are caretakers and were just visiting for a short time.  The husband of the sailboat couple surprised his wife with a stop at Seguin and wanted to take her to the top of the light.  As Terri & John headed out to Ethan’s boat, Patty walked up the hill with our guests and I got Hinckley tied up and waved goodbye just as Ethan turned his boat to head back to Popham.  I headed up to the top afterwards to help Patty with tours and the gift shop.

Besides the five visitors that arrived while we were on the beach, we had a number of others come during the remainder of the afternoon.  Two more guys arrived by sailboat and came up to see the tower after they moored up and first spent some time kayaking around Seguin.  They were joined by their dog Winnie which gave Patty a laugh because she had a dog named “Winnie the Poodle” as a child.  A single kayaker arrived from Popham and hiked up the hill barefoot, wearing just board shorts and life vest.  He toured the tower, museum, and even hiked the North Trail – all sans shoes.

We took a quick break after the kayaking visitor left for a quick lunch of leftover spaghetti and meatballs from dinner a couple of nights ago.  It was good carb load and just in time….

Finally, a three generation family arrived by sailboat as part of their loop trip around the area.  They keep their boat near Boothbay and were heading to Pond Island next, then up the Kennebec, and back

over towards Boothbay somehow via smaller rivers or creeks or something.  The older member of the group (I think the grandfather) is from Augusta and was telling us about a lot of hiking trails around Katahdin Mountain that we might enjoy.  We’ve hiked to the southern end of the Appalachian Trail from Amacalola

Falls to Springer Mountain in Georgia along with a few short sections of the AT and would love to get to Katahdin for the northern end of the trail.  Maybe even the whole AT one day?

After the last group left, it was getting late for any additional guests, maybe after six and we figured we were probably done for the day.  After a little cleanup in the museum, gift shop, and tower, Patty madea pizza with a pizza dough our friends left along with red sauce, mozzarella cheese, and pepperoni.  In fact, all of the ingredients were left by Terri & John! 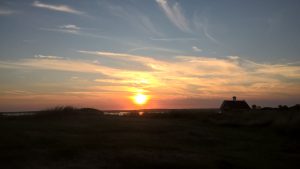 It was another busy day, which is something we’re enjoying so far, and we missed our friends but we were also tired and it felt good to just sort of collapse and read after dinner.  One of the last things we did today was make a crank call to Terri – for some reason, John brought these toy air horn things with him and left one for us.  It sounds somewhere between a real air horn and a clown horn –it’s really loud and every time anyone honked it, John laughed, like a conditioned reaction.  Anyway, we called Terri (we found out they were out to dinner with friends in Portland which made it funnier to me) and just honked the horn a bunch of times.  I’m sure John could hear it and was laughing in the background.

Favorite Moment(s) – walking down to the cove with Ethan’s group of 24 and our friends and then hanging out and talking with everyone as Brook ferried them out to the big boat.