We woke up to calm winds, seas, and a sunny sky. Our friend Deloris (D-Lo) made a breakfast casserole with eggs, mushrooms, cheese, and lots of other tasty things. Patty made a fruit salad to go with it and we had fresh tomatoes, diced onions and jalapenos to sprinkle on top. D-Lo prepared the casserole last night so it just needed to be cooked this morning but first, we relaxed in the kitchen and on the porch enjoying coffee and chatting.

Before we sat down to eat, Chris from MITA (Maine Island Trails Association) and his

colleague Bob arrived a little before 10am to look at some of the trails, the North Trail in particular, where MITA is planning to do some work later this summer. I expected Chris to call first and then row out in Hinckley to bring him in from his moored boat but instead, we met him as he crested the top of the Lighthouse Trail. He had tried to call but didn’t get through (I found out later that my new AT&T plan didn’t renew automatically for the new month as expected) but was able to nose up to the beach since the tide was low and borrow our dinghy with Bob rowing out while Chris moored.

Anyway, they were here. I took off with Chris and Bob to show them the North Trail bog area where the boardwalk is that they hope to replace. We hiked the complete trail including the last section that we haven’t trimmed yet because of the nesting gulls. The grass is so high on parts now that it was a little difficult in places to see the direction of the trail so, apologizes to the gulls, trimming the rest of it is now on our high priority list. Chris measured off the distance of the boardwalk (about 50 meters) and noted a couple of other soggy areas that could use a short section of boarding.

Chris, Bob, and I then went down the hill to look at some pressure treated lumber in the boathouse that I suggested

asking F.O.S.I.L.S. about using for their project. They were pleasantly surprised about how much we have stored in there and thought it would be more than enough to complete their work. They most difficult part would be getting it to the top of the island and then down the North Trail. It will require a small army… Finally, I showed them the camping area adjacent to the cove where volunteers could potentially stay for a night or two while working on the trails. Again, they were pleasantly surprised with what they saw. Chris seemed excited to get started (scheduled for July 13).

I rowed Chris out to his MITA boat and he came in to pick up Bob just as they had done on their way in. Just as they

were pulling back from the beach and I was tying up Hinckley, Patty was coming down the steps to the cove to see if I needed help. I hadn’t taken a radio with me and they (very kindly) had waited to eat until I was finished. After 90 minutes or more, they were starting to wonder if I was ever coming back! We’ve been eating pretty well the past few days (actually the past several weeks) and no one starved while they waited.

We sat down and enjoyed the casserole, fruit, and everything else prepared for a big and tasty meal. After breakfast, Scott was sitting near the top of the tram watching the water down between the Cove and Cobblestone Beach and thought he saw a couple of seals playing amongst some lobster buoys. We’ve seen seals close to Popham on our way back and forth with Ethan but never near Seguin. The four of us headed down to the Cove Trail and the rocks beyond to get closer to the area he was watching but never saw the seals. Maybe they just took off or maybe he mistook some ducks for seals? We’ll have to ask if they are ever seen out here. We spent a long time out on the rocks around the edge of the water along the cove watching boats and birds. Once nice boat came in while we were out there and tied up to one of our moorings to have their lunch. So cool!

Our friends carried their stuff down to the Donkey Engine House (Paco’s) when we went in search of the elusive seals so we were ready for Ethan to arrive to pick them up around 2:30-ish. We enjoyed our last bit of time together just sitting on some of the big rocks along the beach. The tide was low giving us plenty of places to sit and spread out. While Scott, D-Lo, and I were doing just sitting and chatting, Patty took a spray bottle she prepared with soapy water and within minutes,

found a leak in Hinckley (a large scratch) and possible another (around one of the pressure relief valves). With that info, we can look for a patch kit and try to repair the dinghy. Shortly afterwards, Ethan came around the corner and we loaded Hinckley up and pushed off. Patty stayed on shore while Scott (rowing), D-Lo (on the bow), and I (on the stern) went out to meet the boat. We said our good byes (for now) as they moved onto Ethan’s boat and I switched to the seat to row. Before pushing off, Ethan introduced me to his wife and (new) baby who had accompanied him over. 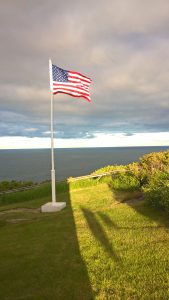 steps but she wasn’t fazed at all. I wonder if any other dogs will do that this summer. After we came down from the lighthouse, they (the two guys and Godiva) went inside and checked out the exhibits and talked with Patty in the gift shop while I got some water for Godiva. One of the guys is a nurse locally and told us about some moths that can cause a rash or even serious illness. Apparently this 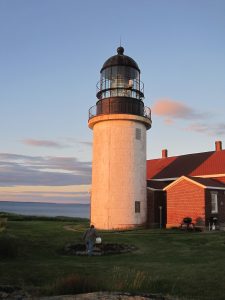 is a recent development in Maine. We looked it up on the Internet after they left and found it actually comes from the caterpillars. We’ll have to keep a lookout for suspect caterpillars!

With our late breakfast and then Scott & D-Lo leaving mid-afternoon, Patty and I never ate lunch and were getting hungry so Patty whipped up an early dinner of scallops, broccoli, and a quinoa/brown rice side. Again, the scallops were unbelievably good. Along with Dot’s for ice cream, I think Plant’s Seafood for scallops will be on our list of stops every Wednesday for the rest of the summer.

We had a beautiful sunset and then read for a while before heading off to bed early. We (maybe) had a little too much fun with our friends and were just plain beat 🙂

Visitors – 3 (including the brave dog who climbed the lighthouse stairs)

Favorite Moment(s) – Walking the South Trail and then hanging out on the Cove Beach with our friends D-Lo and Scott.