Today was our second “day off” since we arrive on Seguin Island on May 21st.  Like last Wednesday, we were scheduled for pickup at the cove at 7am and got down there five or ten minutes before seven.  The dinghy has a very slow leak on the starboard side and luckily, Ethan was running a few minutes late giving us just enough time to get the foot pump from the boathouse, add a little air, and return it before we saw him coming around the northern end of the island.  We had our two backpacks again, mine with laundry and Patty’s empty except for our cooler bag and a few other re-usable shopping bags – hers will be full of food on the return trip.  We also had our old school metal Coleman cooler which we used to bring food here the first day but no longer need, an empty water jug, and a couple of empty gas cans that we’ll leave at Cyndy’s for refill and return next Wednesday with the Wednesday Warriors crew.

Patty and I were able to row out to Ethan’s boat together with all of our stuff in one trip.  We boarded the boat and

transferred our stuff before Rick took over the dinghy and was loaded up with full water jugs, gas containers, building materials, and who knows what else.  Two or three trips in the dinghy got Julie, Rick, Ken, and Cyndy ashore with everything they brought to Seguin and we were off to Popham.  For our second Wednesday trip (and third trip counting the Saturday we arrived), we were lucky again with nice weather and calm seas.

I didn’t keep a log of errands like the first week but it was similar except that we tried a different laundromat, and different Shaw’s grocery store, both in Brunswick.  We felt like the laundromat in Bath was kind of expensive and wanted to try a different place.  The one we went to in Brunswick was nicer (very clean, friendly staff, free wi-fi, etc.) and a little cheaper than the one in Bath but the Shaw’s seemed to be on the verge of closing or something – a generally gloomy vibe.  All in all, I think we’ll go back to the one in Bath…  Still though, it was fun to try something different.

Besides taking care of laundry and grocery shopping, we went to the 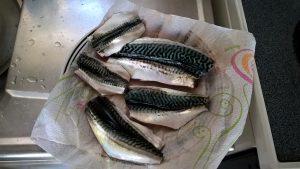 natural food store in downtown Bath that we really like.  We had lots of time this week and visited a coffee shop that was recommended to us and browsed around a store called Reny’s downtown.  They’re a big general store that sells everything from Carhartt clothing to Keen (and other) footwear, camping & fishing gear, home goods, and downstairs they even have some food items.  For our friends in WNC reading this, it’s very similar to Mast General Store.

For lunch, I had a craving for pizza and we tried a dive looking joint named Mario’s downtown.  The people were really friendly, the pizza very so-so.  We’ve been told to try a place called the Cabin for pizza but this place just had that look of no ambiance =  good pizza.  Maybe that’s a NJ thing?

Next time I crave pizza I guess we should try the Cabin.  After lunch, we walked a couple of blocks to get ice cream at Dot’s – I got a “small” sea salt caramel waffle cone that was huge and Patty got a “kiddie” ginger ice cream that was reasonably sized.  I really liked mine a lot and Patty liked hers so much that she’s still talking about it.  Dot’s might be a regular Wednesday stop for us.  Since we’re preparing all of our own meals, eating pretty healthy, and having normal portions all week, when we get to town, we want to eat everything.  I figure doing that once a week is still better than going out a few times a week like we do in our normal life?

We met Ethan back at the dock around 2:15 and he helped us bring our backpacks and cooler bag down to his boat.  We hung out for a while waiting for his friend Willa who was going over to Seguin with him to check it out.  While we were waiting, Ethan offered us four or five Mackerel’s he had just caught…we accepted.  We also saw a couple of sturgeon jump out of the water that were pretty big.  Ethan said they are protected and you’re not allowed to fish for them – I guess it’s catch and release if you accidentally get one.  Willa was a few minutes late arriving, having been delayed when she had to help her dad remove a big snake from his house.  She had the pictures to prove it and the snake looked pretty dangerous.  We really had a few good laughs as she told us about it and showed us more pictures.  The four of us and Willa’s dog Ollie (aka Nugget) headed over to Seguin on fairly calm waters.  Ollie had never been in a boat and was a little nervous at first, even trying to climb onto a bench seat behind me and Patty but he rallied and did really well.

We were met at the Cove by Cyndy who was drifting in the dinghy waiting for our arrival.  The four of us, Ollie, and our stuff all did the dinghy shuffle getting to the beach and since Ethan also went ashore with Willa and Ollie, the Wednesday Warriors didn’t come out to the boat right away.  Last week we just chatted with the WW as we passed getting to/from shore but this time we had 45 minutes or so to catch up on what they did while we were gone, what we’re working on, etc.  We found out then that the tram had a problem when they arrived this morning and the WW’s carried ALL of our water and gas up the trail.  Empty handed, the trail can leave you huffing & puffing, so we cannot express how thankful we are for that!  It was really nice to have extra time to catch up with them this week and while we were doing that, Ethan took Willa on a quick tour of Seguin and they carried some of our stuff up the trail too – it was help all around for us today!  Anyway, Willa wanted to visit Seguin because she’s a Yoga instructor (in Portland) and is thinking about offering some summer Saturday classes on Seguin.  I’m not sure of any details but we made sure to ask if we can participate…yes we can.

When they were ready to go, we did the dinghy shuffle again, ending with me rowing the last leg out and then returning to the cove for Patty and me to tie up the dinghy above the high-tide mark.  Ollie is a real water-loving dog and wanted to play fetch with a stick he found right up to the last minute so he and Willa were on that last trip out with me.  He even brought his stick onto the dinghy.  Oh, I should mention that we found out the dinghy’s name is “Hinckley” in honor of a dog of Cyndy’s who is no longer with us.  I’ll try to remember to refer to the dinghy as Hinckley from now on.  I need to find out the name of Ethan’s boat too so I can start calling it by name as well.

After everyone left, we carried our remaining stuff up to the house and were getting it all put away when three visitors came up the trail.  They visited the museum and took a tour of the tower but didn’t stay too long because a fourth in their group was back at their boat minding their dogs.  One of the visitors said she and her husband come out at least once each year to bring friends to see Seguin.  This time, their friends were from Cabot, VT and I made sure to tell them that I love everything from Cabot, especially the cheese.

Once our visitors left, we finished putting everything away and then tackled cooking the fish from Ethan.  We had so much food off island, though, the fish will be lunch tomorrow.  Something to look forward to – trying something new!

Favorite Moment(s) – Spending extra time with Wednesday Warriors when we got back to Seguin and Dots Ice Cream in Bath.