Home » Blog » Getting to Work

The sun rises early here. Like really early. Like 5am! At the foot of our bed, across the room, is a window that faces south/southwest which is perfect for the early light. We have a crystal clear view (on this warm, clear morning) but no sun shining directly in. I think we’ll take on camping-like hours and rise early and go to bed early to take advantage of the long summer daylight.

Michael got up earlier than the rest of us and made fresh blueberry muffins that we all enjoyed with coffee while we figured out a game plan for the day. The forecast called for some rain but, as it turned out, we had a beautiful sunny and warm weather all day.

The main thing we all worked on from around 9 to 5-ish was grass cutting and trimming back the trails. Patty and I started at the bottom of the island, cutting the grass all around the base of the tram and the Donkey House (I’ll get into all of the structures and layout of the island in an upcoming blog post soon). While I cut the grass with a push mower, Patty worked on trimming the winter growth back from the Cove and Cobblestone Beach trails.

In the first couple of hours, Patty went up and down the trail several times to get different supplies – she’s going to feel it tomorrow – like doing squats at CrossFit! We had a mishap when Cyndy and I accidentally added 2-stroke (mix) oil to the lawn mower which gave me the chance to do an impromptu oil change. All seems to have ended well as the mower ran fine for several hours afterwards. By early afternoon, Patty and I had finished all we could do at the bottom of Seguin without the weed whacker which Cyndy had going full throttle up top.

While we worked below, Michael and Cyndy worked on completing the grass cutting up top and weed whacking the main trail from the cove to the top. They also finished some other odd jobs like getting the Coast Guard radio antennae re-affixed so we can monitor any alerts they transmit like “watch for kayakers reported missing. ”

Lunch was a mix of leftovers from last night for Cyndy and steel cut oats for the rest of us. The oatmeal was ready to be heated this morning, but lost out to the blueberry muffins J

As I was moving up to the top of Seguin to help Cyndy & Michael and Patty who had already gone up, our first visitors arrived by sailboat. I was just putting the mower away in the Donkey House and was able to greet them at the bottom. The three of them had all visited Seguin before and were familiar with the island. They hiked the North Trail (maybe I should say blazed since we hadn’t trimmed it yet) and Patty took them up the lighthouse and into the Museum for her first tour. Patty even made sure to get their picture and have them sign the guestbook. Later, when they were sailing away, we got a nice picture of their sailboat heading away from the top of Seguin. The mentioned to Patty that this is not their first year being the first visitors of the season!

All four of us worked on the grass for the rest of the afternoon. Since it was fairly highly when it was cut, we needed to rake up the clippings and carry the cuttings into the brush. That will be a onetime task as long as we keep the grass trimmed regularly. By the end of the day, we felt pretty good about the progress we’d made. We need to finish raking tomorrow but it’s definitely doable in a day.

Patty and I prepared a dinner of a fresh calamari scampi with cauliflower steaks (brushed in oil with Sriracha) and Rosemary Olive bread. We had forgotten to bring Parmesan cheese but Michael came through with a wedge directly from Italy that a friend had given to him recently.

After dinner, Michael and Cyndy did kitchen cleanup duty while Patty and I sat outside in a west facing bench along a bluff over the water to watch sunset. They sky was clear above us but a low level band of clouds at the horizon blocked the sun which created a beautiful light effect across the entire sky. Patty went up in the lighthouse to take some pictures with our fancy camera while I stayed below to get pictures and enjoy the view. 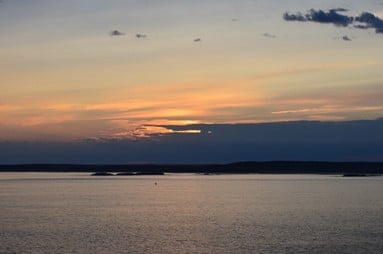 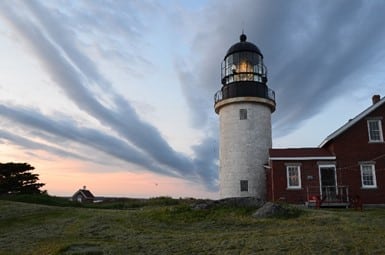 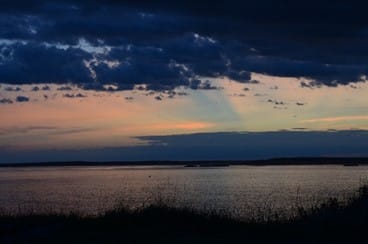 After sunset, the four of us sat and chatted around the dining room, enjoying some chocolate Cyndy brought from Bath Sweet Shop. We talked about our game plan for tomorrow. Once again we called it an early night (although not as early as yesterday when we call got up by 5am at the latest) and headed to bed.

As I write this on Tuesday morning, I’m sitting at the dining room desk facing east watching the sun reflect on the ocean waves crashing beneath us. A good friend from Brevard sent us a message on Facebook yesterday that simply said “High Five!” Well said!