Our second full day on Seguin started with early morning coffee, a big breakfast of eggs, bacon, and toast and then planning for the tasks of the day.

We started with the North Trail which our first visitors hiked on Sunday and reported back that it was in pretty decent condition. The four of us hiked it slowly, clipping overgrowth and clearing a little brush that was across the trail here and there. Near the end of the trail, we saw a geological marker and also found a bird’s nest with eggs in it. There didn’t seem to be any birds minding the nest but we made sure to leave it undisturbed. One of our guests on Sunday (a bird researcher) also saw the nest and said he thought it was an Eider nest The views from the North end of Seguin were probably the best I’ve seen so far – we could see Fort Popham and the beach, waves crashing below on the rocks, the lighthouse peeking above the ridge line behind us, and the Boat House and Donkey Engine House across the Cove.

After hiking back up to the top of the island, Patty and I took a few minutes to sneak into the kitchen to prepare pollo asado marinade and get some chicken thighs soaking up the goodness. Afterwards, we helped to finish raking the grass clippings and then all took a break for a lunch of salad of fresh greens with leftover Haddock and olive bread. It was a nice “light” lunch after our big breakfast.

In the afternoon, we checked out a problem with the oar lock of the dinghy that we thought we’d need to get parts for on our day off but we were able to fix it instead. That’s good news for us since it means one less stop we need to make on the mainland on our first day ashore. The logistics of our day off are something we need to learn and perfect, so the fewer stops the better on our first run to town. After taking care of the dinghy, we stayed at the bottom of the island to 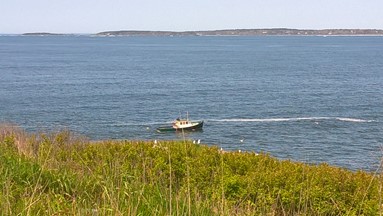 finish weed whacking around the base of the tram, the outhouse, Donkey Engine House, Cobblestone & Cove Trails. We also got a tutorial on how to maintain and clean the outhouse composting toilet. It is a really impressive structure that a young man built as his Eagle Scout project several years back. Besides the Keeper’s Quarters and Guest Quarters, it is the only bathroom facility on the island and the only one for day trippers.

As the afternoon ended, we all showered up and set about preparing dinner. Similar to experiences caretaking in Mexico and elsewhere, we’re finding that planning and preparing meals is a big focus of our attention. Patty and I brought several “planned” dinners as did 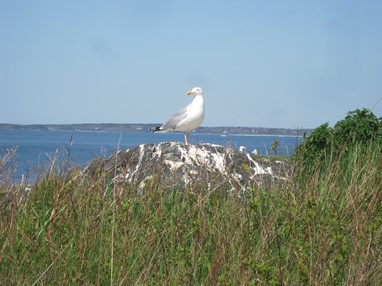 Michael & Cyndy so we’re taking turns cooking and working out which ingredients to use each meal. Patty and Michael are both very good cooks so we’re eating well. We’re also working it off with lots of physical work. Tonight we grilled the pollo asado on the charcoal grill that Michael and I set up earlier in the day along with steamed asparagus with almonds that Cyndy prepared, and corn tortillas that Patty and I picked up at a little bodega in Portland. We finished it off with a strawberry rhubarb desert that Michael put together.

Dinner cleanup ended just before eight o’clock when we all went outside with mugs of hot tea to a west facing bench to watch our first full sunset since our arrival. Last night’s was good but clouds at the horizon obscured the final minutes while tonight’s was absolutely perfect. Mist on the shore of the mainland added a mysterious aura to the dramatic setting sun. We lingered outside until the chill caused us to head in.

Finishing off the night, we played a game of Scrabble. I should mention that I am not a game player – it’s just a quirk of my personality I guess. But, I wanted to be a good sport and immediately offered that I’d like to play when Cyndy asked. I wasn’t very good at it and Michael seems to be a semi-professional Scrabble player who plays on-line daily against his brother. Cyndy was pretty good too, Patty was good for not having played in a long time, and I pulled up the rear with the low score. I don’t think I’ll be invited to play again but I hope they will and I’ll have fun just watching and offering a running commentary.

Tomorrow’s forecast is for rainy weather which will let us take care of some indoor tasks. We have a little bit of a moth issue on our side of the house which we hope to take care of and then we need to tackle the museum/gift shop setup to be ready for our first official day on Saturday (Memorial Day weekend). We’re also hoping to get in a tour of the Whistle House (workshop) to learn where everything is kept and what materials are ours to use as needed. Finally, and probably the most exciting and fun, we are looking forward to testing the fog signal in tomorrow’s fog. It will be our first time hearing it! 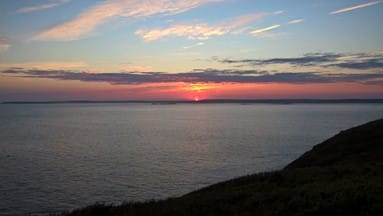 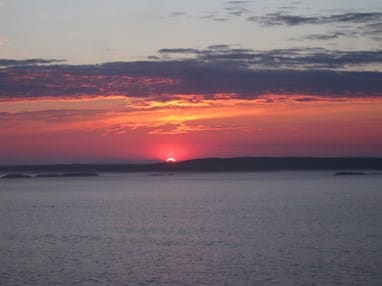 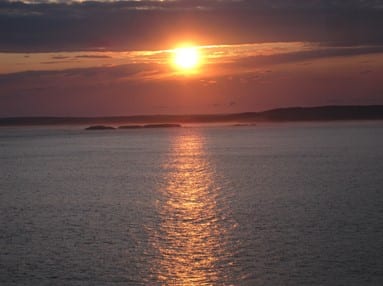