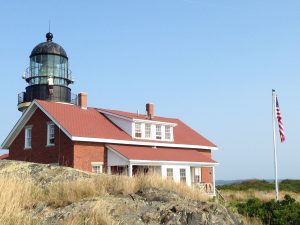 Seguin is still buzzing with  activity even after Labor Day and the departure of our Summer Keepers Larry, T’Ann and Bandit.  We are extremely grateful; for all they did for Seguin, FOSILS and visitors to the island while living on Seguin this past summer and we wish them safe travels as they drive back to Texas!

Tim Mount and Lynne Marco returned back to Seguin arriving on Labor Day.  Their  original stint as Keepers was back in 2008 and we’ve  been lucky to have them return as Fall Keepers to enable us  to stay open and operating through Columbus Day.  They were on-island until September 13th.  Since leaving Seguin Fall of 2008, Tim and Lynne have become somewhat professional lighthouse keepers doing a stint at Bakers Island in MA and 2 stints in Tazmania! They are on board again for Fall of 2016 on Seguin.

Board Member Ken Young and his wife Dot manned  the island and stayed in the Keepers Quarters for three nights following Tim and Lynne . This was their first overnight stay on the island and both reported they had a wonderful time.  Ken worked on cutting stumps and giving tours while Dot looked after the museum and gift shop. Thank you Ken and Dot for your endless service to FOSILS!

Board Member and On-Island Committee Chair Cyndy Carney lessened her commute to the island each week by staying there as interim Keeper for Wednesday and Thursday September 16th and 17th along with Julie Casson who is FOSILS newest volunteer and member of the On-Island Committee.  Julie has recently relocated to the area and fits right in – she is “hooked” on Seguin!

Ethan DeBery (our Captain, Board Member and  On-Island Committee member), and is wife Lindsay will be  Keepers from September 17th through the 25th.  Cyndy then returns on the 25th for the next rotation along with Michael Boonstra who was  Summer Keeper in 2010 and present to help open the island back in May of this year.  Joining Cyndy and Michael for this  last stretch will be Cyndy’s new puppy, Grady!

The work doesn’t stop.  Fall and September has been very productive with a return of volunteers from The USS Zumwalt (currently based at Bath Iron Works) who pitched in to move rocks (and they were not  small rocks…), to paint the upper cat walk (can’t beat  the views) and to clear brush around the old engine in picnic area.  They also dug around boat house and weed whacked the front hill, they do whatever they are asked to do and keep coming back and we so appreciate their assistance!

Our Wednesday Warriors, Jeff, Tom and Julie, put the finishing touches on the gift shop door.  Mowing was done by Carney (Cyndy’s daughter) and Cyndy.  All soffit work was completed and the tower doors were painted and rehung.  The pump house trim  was rotted so it was replaced and painted and the Oil House  conversion started (anticipated to be complete by Columbus  Day). The threshold on kitchen door was replaced.

It is hard to believe but closing day is set for Saturday October 10th with the rain day being the 11th or 12th.  Another season coming to a close –