Early morning came rainy and windy but by the time we really got up and moving, the rain had stopped.  We heard some showers overnight and a bit very early but I suspect it wasn’t enough to make up for the dry weather we’ve had the past two or three weeks.  The forecast calls for more rain today and tomorrow and I hope it actually happens to help things get more green back into the palate of the landscape here.  Once we were having our coffee, there were spots of sunshine over the island but it still looked rainy to the western mainland.  The wind was

definitely more calm than it was late yesterday.

We had fresh fruit, yogurt, and granola for breakfast – a favorite of ours.  Afterwards, Patty cleaned house – dusted, swept, etc. while I caught up the blog.  It’s funny that I’m the blogger dude but whenever I sit down to work on it and she does something else (like clean), I feel like I’m not doing my part but if I try to convince her to sit and relax while I blog, she feels like she’s not doing her part.  Partners!

Later on, Patty went over to the museum to get the inventory/paperwork in order for tomorrow when we report sales and re-supply while I did the switcheroo on compost in our guest quarters, trading the “old” compost (which was not quite right), for the “new” compost in advance of or first occupants of the guest quarters next week.  Exciting stuff!

Around mid-day, Cyndy emailed to let us know that the Wednesday Warriors would not be coming tomorrow.  The forecast is not good and it’s pretty much a certainty that they wouldn’t be able to get their punch list for the day done so they called off the workday.   Between what we’ve already stockpiled and the survivalist bunker’s worth of food our friends Terri & John brought out last week, much of which we still have, we’re ok whether we make it to the mainland or not.  Aside from food, we seem to be “stretching” our wardrobe in such a way that in seven days we go through only three or four changes of clothes.  Hmmm…..  Maybe we need to work on that?

Speaking of food left by Terri & John, Patty made a batch of tortilla soup with chicken, chili pepper, onion, celery,

etc. and put it on the stove to think about itself for several hours.  While she did that, I went down the Whistle House and made a new sign post for the Lighthouse so we could better guide visitors as to

when a tour was in progress (i.e. Please Wait) with an exit message to please remember to sign or guest book.  Patty joined me to work on the lettering and I painted the rough post and stand a bright white that’s used for much of the signage and other things here.  We have a wonderfully well-equipped and stocked

workshop here with tons of different paints, tool, and just about anything we need to complete a “Plan B” project (seriously though, we have everything we could hope for to have fun and be productive).

(I think we finished it) with lettuce, tomato, roasted peppers, grilled vegetables, and a side of various olives from the antipasto bar at Shaw’s.

Following lunch, we gathered most of what we’ll be taking with us off-island tomorrow like dirty laundry, my backpack (Patty’s was already down there), empty water bottle, etc.  We’re expecting heavy rain, or at least the possibility

of it, in the morning and figured the less we have to carry in a potential

downpour the better.  The weather at this point was actually really nice so we stayed down by the cove for a while watching juvenile gulls on their first flights off western side

of the cove (where the North Trail is located) and baby ducks swimming in the cove.  It was all really serene and beautiful until Patty walked down to the cove and got dive-bombed (see picture in this post).

As evening fell, we texted Ethan to see if he’d made a decision – go or no go – for tomorrow morning.  He said we were on the edge forecast-wise for getting off-island and he’d let us know at 6:30am tomorrow.  As I wrote above, we’re good either way but I suspect Ethan will be here bright and early….and we’ll be ready. 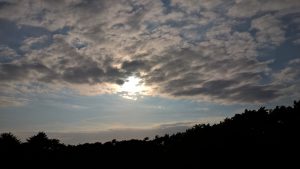 Favorite Moment(s) – watching young gulls and ducks along the cove