As usual for Wednesday, our scheduled off-island day, we got up at 5:30 for our rendezvous with Ethan down at the cove at 7am.  It’s a little earlier than we absolutely need to be ready but it lets us take our time, have coffee, eat a light breakfast, get down to the cove to check the air in Hinckley (and add a little if necessary), move stuff we have staged down to the dinghy from the Donkey Engine House, etc.  Today

was a little different because we weren’t sure if the weather would be good enough for Ethan to make the trip to get us and later to bring us back – he expected to make the call at 6:30am.

Exactly at 6:30, when he said he’d let us know, he texted “I’m going to try unless you tell me the wind is howling there.”  I replied that the wind was only around 10-12mp at the top of the island according to our weather station but that visibility was limited to about 50’ up top.  Ethan jokingly (I think) said to give him an extra 15 minutes to find us in the fog.  It was a go.  Because the Wednesday Warriors weren’t coming out, we went around and locked-up all the buildings, put up a sign on the museum door that said “Closed Due to Inclement Weather”, and then headed down to the cove.

Surprisingly, down at the cove, the visibility was great – we could see north to the mainland, there wasn’t much wind, and the seas were pretty calm.  There was even a sliver of sun showing through the clouds to the northeast.  We didn’t have a big load of stuff to bring with us, just our two backpacks, a bag of trash/recycles, and three empty water jugs.  With Patty in the bow and me rowing, we pushed off to meet Ethan when we saw him coming around Ellingwood Rock towards the cove.  After getting everything transferred to his boat, Ethan had me remove one oar from the dinghy to bring with us (if anyone takes Hinckley, they can only row in circles) and then he tied it up securely to one of the moorings to be waiting on our return trip.

The weather held all the way back to Popham and we took a video most of the way that we hope to share soon on Facebook and the blog.  The fog wasn’t too thick and we were able to see where we were headed and more importantly, Ethan knew where we were going.  Passing by Pond Island, we could see Robin (who we met here at Seguin recently) sitting on the edge of her tent and we waved greetings to each other.  I’m reminded again how luxurious our accommodations are by comparison.

Once ashore in Popham, we started our normal circuit of errands; laundromat to hardware store, back to laundromat, to Walgreens, back to laundromat, to Plant’s seafood, Swango Farm produce stand, Shaw’s grocery store, and Bath Natural Foods.  With errands complete, we went to Mae’s restaurant in downtown Bath for brunch – I got breakfast (lamb sausage with eggs, has browns, and marble rye toast) and Patty got lunch (haddock sandwich with homemade chips) plus homemade lemonade for each of us, mine had blueberries in it too.  Everything was really good just like the first time we went to Mae’s the day before heading to Seguin the first day.  Patty’s Haddock looked like it might have been poached or baked?  Whatever way they cooked it, it was perfect and we’re going to have to try something similar back on Seguin.

Following lunch, we stopped in at the Mustard Seed bookstore downtown to browse around then down to Dot’s for our regular Wednesday ice cream treat (ginger for Patty, java crunch for me) and then to the F.O.S.I.L.S. office which is also downtown on Front Street (above the Mustard Seed).  Normally the office is closed on Wednesday’s because Cyndy, who runs it, is a Wednesday Warrior working on the island.  Since they didn’t come out this week, we stopped by to see her for a short visit.

On our way back we stopped at Cyndy’s house, as usual, to pick up our full water jugs and to pick up our mail.  Just two things this week but both good – a little gift from our friends Delores and Scott who visited us on Seguin in June, and another care package from our friend Jude back in Brevard.  A couple more treats from a bakery in Brevard and a bar of goats milk soap that smells good enough to eat!  On the way from Cyndy’s to Popham, Patty called Jude to catch up and talk a while we had a strong cell signal.  Long enough anyway for us to stop at Percy’s general store in Popham and for me to enjoy a cold beer while they were still chatting.  It was good!

We dropped our stuff at the dock and then parked at the church in Popham and walked back to the dock where Jackson Percy was hosing off the deck of his boat and getting ready to bring a box of fresh lobster up to the store.  Jackson is the guy we call when we would like lobster and he’s nice enough to leave them in our keeper box in the cove.  We talked thanked him again for hooking us up with lobster on the island and talked until Ethan pulled up to take us back “home”.  It was much foggier now than this morning and Ethan said there were some red cells on the radar that he wanted to beat by getting over and back quickly.  We quickly got our stuff aboard and headed off without delay.

We shot another video on the way back that we’ll likely share too although the sound quality is not great because of the wind.  We recorded both videos on our little camera which is sort of dying a slow death so the picture quality is not that great either but we also don’t care if it gets wet so it’s the right tool for a day like today.  The camera that our artist friend Kim called the ‘silly little camera’ until we got a great shot of a bald eagle with it… the shot that she missed with her professional type camera!  Besides the fog, we had some decent swells and little chop that, combined with the flat bottom of Ethan’s boat, made our stuff continuously slide from the bow of the boat back towards the middle where we were sitting.  We kept pushing it forward and it kept sliding back…

The water was much calmer as we came into the cove and the fog was not too thick so the beach was very clearly visible from the dinghy’s mooring.  Really, that was my about my only concern today – being in the dinghy in the cove and not being able to see the beach.  Still in a hurry for Ethan to get back to Popham ahead of the severe weather showing on the radar, I quickly climbed aboard Hinckley to reattach the missing oar (anti-theft device) while Ethan dropped the water jugs into the bow and then Patty climbed aboard.  In short order, we were rowing to shore and Ethan was off at full throttle towards shore.  We texted later and he made it back without any problem and beat the storm if it ever even arrived.

We brought our stuff up the hill, unlocked, unpacked, and settled in.  We did eventually get a short burst of heavy rain and it looked like it might have rained a little while we were on the mainland but not as much as we needed.  The fog came and went intermittently for the a few hours we never did get any additional rain.  Late afternoon into early evening, the sky mostly cleared over Seguin and to the east with some big clouds still hanging over the west over Popham and Small Point. 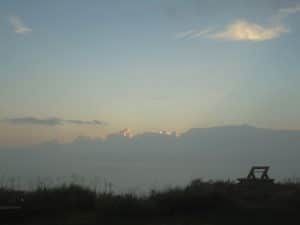 Patty baked (so much for my baking goals) oatmeal raisin cookies with chocolate chips using some of the 1-minute oats Terri & John bought by mistake.  We 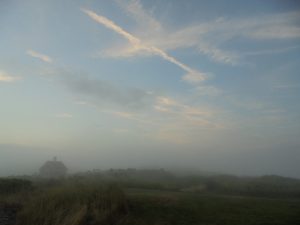 wouldn’t have eaten them otherwise but in cookies, mixed with regular rolled oats, they were perfect for moist and soft cookies.  Our sunset was above the clouds over the mainland so instead of 8:15ish, it happened about a half hour earlier and created some dramatic lighting on the horizon. 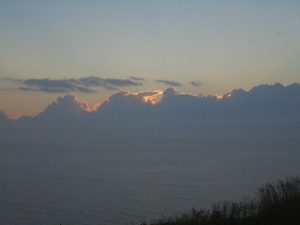 we just sliced some fresh rosemary olive bread we bought at Bath Natural Foods this morning and had that along with a dipping oil Patty made and some sliced cheddar and then called it a day.

Favorite Moment(s) – riding to Popham and back on Ethan’s boat in the fog, swells, and chop