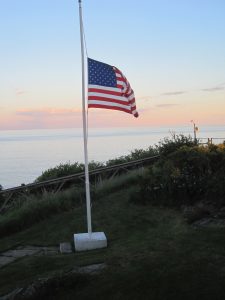 It started off windy and overcast again today. With just a few breaks, the wind has been blowing steadily since Thursday or so. The temperature is not too cool and we’re getting some sun here and there, but the wind keeps on. It is starting to wear on us a little because it’s not very comfortable to be out in it and being outside is our favorite

thing about being here.

After breakfast, we mowed the top of the hill with Patty using the Gravely riding mower and me with a push mower on the hills. The grass has been a little brown since we got here and we thought it was mostly due to the shock of having so much cut at once but we also thought we might be cutting it too short subsequently. We were planning to raise the decks on all the mowers to let it grow a little longer and Patty checked with Rick. He concurred and said the levels we were told to use were shorter than he would recommend. With the mowers set higher to cut a higher length, we didn’t cut off as much as usual and it will take a little while for the new height to even out but the grass should fill in thicker and become greener over the next week or two. That’s the hope anyway…

After finishing with mowing, we were just about to sit down for a late lunch of soup when two guests came up the hill. We were surprised to see anyone today because of the weather but went out to greet them. They were visiting the area for a wedding in New Hampshire and are

big Lighthouse fans and made a point to visit to the coast to see Seguin and others. It turned out also that they live in South Carolina but not that far from where we live. Patty took care of giving them a tour of the lighthouse, showing them the museum, and selling them a T-shirt in the gift shop while I puttered around in the yard taking care of some small things on our list. After they left, we sat down for some soup and crackers. They also left a donation with us that is MUCH appreciated! 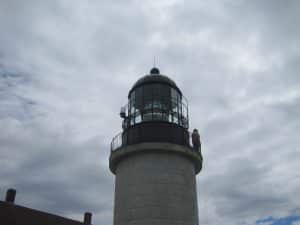 We headed down the hill in the afternoon with some stuff for our day off-island tomorrow (Patty’s backpack, empty gas cans, etc.) and to do a few small things like adding more stones on top of the main electric cable and cleaning the historical marker in the campsite area. Around the island, we have five or six of the historical marker signs done in bronze that are really nice looking and apparently comfortable for small birds to perch on in such a way that their rear end is right over the sign’s writing…they need cleaning frequently! While we were down there, we also put some air into Hinckley and Patty patched two leaks that we found the other day. One was a scratch that should hold a patch pretty 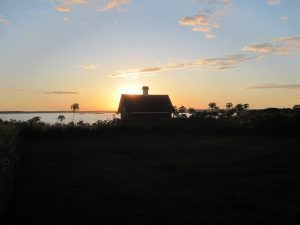 well but the other is around a seam where one of the pressure relief valves is and Patty’s not sure how that will hold. We’ll know tomorrow if it’s at least a little better or if it’s leaking about the same.

Late in the afternoon, the wind finally died down and when it did, it

stopped completely. The water became glassy smooth all the way around the island. The sky cleared with just a few big clouds moving 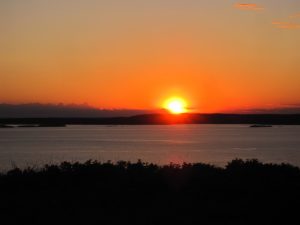 past offering a few sun showers as they went by. All of a sudden, it was a perfect evening to use the grill, the first we’d had in a while. We had some nice grass-fed burger meat ready for a quick meal one night and used it tonight. While I grilled the burgers on the gas grill, Patty cut up and baked/broiled sweet potato fries and a Sriracha-sour cream dip to go along with them. We had all

kinds of fixings like cheese, tomato, lettuce, onion, and grilled jalapeno to go along with the burgers. It was a simple and delicious meal.

After dinner, we watched a beautiful sunset from the west facing bench and took pictures of the setting light against the landscape and buildings of Seguin.

Favorite Moment(s) – cooking on the grill after the winds calmed and the sun came out.