Home » Blog » After the Storm

After last night’s storm, the surf was still up this morning and it was foggy and wet which let us sleep in a little since the sun wasn’t shining brightly by 5am as it is some mornings. We enjoyed bacon and eggs for breakfast along with coffee of course.

I took a walk down to the cove after breakfast to make sure everything looked ok, most importantly, checking that the dinghy was still there. The water must have come up pretty high because Hinckley (the dinghy) had moved a little but it was no worse for wear. There was some new driftwood on the beach and I moved the biggest stuff up the

hill at the back of the cove to try to keep it from washing out and potentially damaging Hinckley another day. I need to get down to the

cove with the chainsaw and cut some of the driftwood up into small pieces but that will wait for another day. First, I need to make sure I can get the chainsaw started! There was lots of evidence of last night’s winds too with much of the taller grasses laying down and branches and leaves on the lighthouse trail.

The ground was really wet from the rain keeping us from mowing, so we went to the Whistle House to get some paint on the infamous screen door project. Patty is the painter on our crew so she painted and I sanded the half-round molding for her to paint also. By

the time we finished with that, the sun had come out and things were drying enough for us to do some mowing.
Patty hit the top of the hill on the riding mower and while I trimmed the South 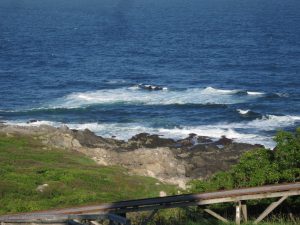 Trail. Around noon, we took a break for a lunch – we each had a BLAT (bacon, lettuce, avocado, and tomato) sandwich.

Following lunch, Patty continued mowing while I started by weed whacking around the boat house on a steep hill that hadn’t been trimmed yet. It wouldn’t normally need it but Rick asked me to hit that area so they can inspect the structure’s sill plate. It was a little tricky getting into position to do the trimming, and the wet ground wasn’t my friend, but it should

be good enough to get in there for a good look. After that, I did some push around the tram tracks until Patty came down to join me. She took over the push mowing and I used the weed whacker to trim

around all the stuff the mower can’t reach. Once finished, we headed up the hill to take a rest and enjoy watching the big waves from the front porch for a bit. 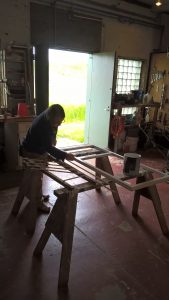 We’ll be off-island on Wednesday as usual and we like to stage things that we’ll need to take with us to the mainland down in the Donkey Engine House beforehand. We made a trip down there later in the afternoon with Patty’s backpack for groceries, empty

gas/water cans, etc. When we got down to the Engine House, we could see the tide was low in the cove so we went down and enjoyed being on the beach for a while. Patty found a big mussel – one of these days, we’ll have to harvest enough for a meal or at least an appetizer.
By the time sunset rolled around, the sky had cleared nicely and we enjoyed another beautiful sunset.

Favorite Moment(s) – spending a few minutes together on the beach 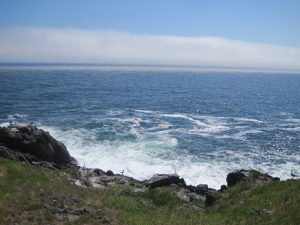 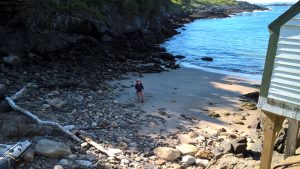